Oracle president says sales of ‘engineered systems’ on the rise

Server revenue down 14 per cent to $669m at technology company 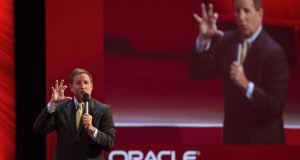 Mark Hurd, co-president of Oracle, said the company’s overall software business grew 8 per cent and that the company was looking forward to its traditionally good second-quarter sales results. Photograph: Bloomberg

Though the computer server market has been lacklustre in recent years, sales of “engineered systems” – hardware loaded with specially designed, complementary software – is a major growth area for technology company Oracle, according to company president Mark Hurd.

“The server market measured in unit [sales] is either flat or down slightly. And last year was not a great year for servers,” he said at a briefing on Monday at OpenWorld, the company’s annual user conference in San Francisco.

Engineered systems, huge computers which are generally the highest-profile product announcementsat OpenWorld, are “a very big part of our business in hardware and software, and we’ve chosen very aggressively to go after growth”, Hurd noted.

Revenue is tallied by splitting income streams into separate hardware and software buckets, he said, but declined to state specific figures in each category.

Hurd didn’t indicate whether the company believed engineered systems income would eventually replace declining income from hardware sales generally. While engineered systems sales may be up, hardware sales have generally declined for several quarters in a row at the company. For the most recent quarter, ending August 31st, server revenue was down 14 per cent to $669 million, compared to $779 million for the same period last year.

On the other hand, overall revenue growth for the last quarter was modest, rising just 2 per cent, below analyst expectations. Profit grew 8 per cent.

The emphasis in executive keynote talks has been on the massive growth of big data – information coming in from web, social media, sensors and other sources – and the need for adequate analytical tools to extract useful meaning and insight from the data flood.

Already, over nine billion devices are connected to the internet, Hurd said. “By 2020, that number will grow to 50 billion.”

In a briefing following his keynote speech, Fisher said Intel has “a deep tradition of working with open-source communities”.

“We’ll look across our architecture to optimise every feature that’s performance-related – but we do it in an open-source way. It’s all in the open. The only way you can bring more value to your platform is to invest. So we invest.”

Intel acquisition
During his keynote, he highlighted how healthcare company Aetna was developing applications using development tools from Irish company Aepona, which Intel acquired in May.

He said the acquisition of Aepona lets Intel help organisations develop better applications. Aepona has software that enables developers more easily connect into networks, to produce services that network providers and other companies can offer to customers.

“The idea behind it is you are going to generate value within your enterprise. The value with Aepona is to meld the outside world” with an enterprise, he said.

Fisher also emphasised the importance of big data and the growing number of devices connected to the internet, forming a rapidly expanding “internet of things”.

“I think this is going to be the biggest inflection point that we’ve seen in years,” he said, using the term Intel co-founder Andy Grove famously coined to describe game-changing moments of transformation in technology.