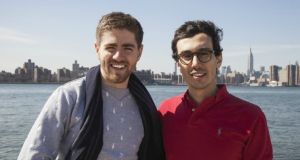 Stripe is continuing to splash the cash with the online payments company this week co-leading a $115 million (€ 96.6 million) funding round for US fintech start-up Ramp that values it at $1.6 billion.

The news comes on the back of a number of big investments made recently by the company founded by Patrick and John Collison in 2010.

Stripe has teamed up with D1 Capital Partners for the latest funding round for Ramp, with the new valuation leading Ramp to become one of the 10 fastest-growing US start-ups ever.

Ramp was founded in 2018 by Eric Glyman and Karim Atiye who previously founded Paribus, a consumer finance start-up acquired by Capital One in 2016.

The company has developed a corporate card that is built to save businesses money by analysing usage to help companies identify savings. It has experienced stellar growth of late with transactions jumping by 400 per cent over the past six months and annualised transaction volumes totalling $1 billion.

Ramp claims to have helped more than 1,000 customers identify over $10 million in wasteful spend, eliminate expense reports, and streamline financial operations to close their books 86 per cent faster.

“We have spent the last two years focused on building the best possible product for our customers and have designed an incredible user experience and capabilities not found in any other corporate card or spend management platform,” said Mr Glyman.

“During our next phase of growth, we plan to expand our efforts to bring the value of Ramp to more businesses in more places and to transform the way more companies do business,” he added.

Stripe has been spending big of late with the company leading a $35 million funding round for payroll infrastructure start-up Check and a $102 million investment in online checkout company Fast in January alone.

The company, which this week made its first move into the Middle East, has of course, also been raising funds of its own. It is now valued at $95 billion after securing an additional $600 million (€502 million) in investment last month with the State’s sovereign wealth fund among the investors.

Stripe, which intends to create more than 1,000 jobs in the Republic over the next five years, is among the most valuable privately-owned tech companies in the world with its valuation having almost tripled over the last year.

It currently employs more about 2,500 people globally, including 300 in Dublin.