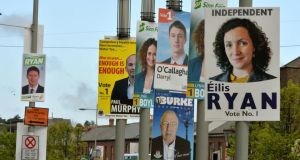 Election posters are still seen by many as the best form of campaigning. Photograph: David Sleator

“I’ve been studying the effectiveness of web campaigning in Ireland for quite a long time,” says Dr Matthew Wall, “and overall, posters are by far the most effective form of campaigning.”

Wall, a lecturer at Swansea University’s department of political and cultural studies, admits that this may sound old-fashioned, coming as it does in an age where the power of social media is often championed and big data’s political possibilities are extolled.

However, in Ireland, he says, “if you don’t have your ground game, it doesn’t matter” how much a candidate in the upcoming local and European Parliament elections chooses to spend on a digital strategy.

Dublin City University-based political scientist Dr Jane Suiter says the utilisation of big data tools by Irish political parties will go “nowhere near” the level reached in other countries during the election race.

Meanwhile, Kevin O’Brien, an account manager with Dublin-based geo-data specialists eSpatial, notes that “the matter of new redrawn constituencies with fewer seats available” for the European elections should have data crunching software top of the list for those candidates at least.

The options open to them, he says, include creating a map using demographic data – such as age groups or average level of educational achievement – to “gauge candidate suitability”, with the ability to overlay that map with “their own data from opinion polling” available too.

Variation on theme
Independent candidate Shane Conneely did a variation on this theme himself, using the Central Statistic’s Office small area population data from the 2011 national census to drill down into certain areas among the constituency and extract demographics such as age profiles and educational history among clusters of “about say 200 to 400 people”.

Running in Terenure-Templeogue in Dublin, the “tech and political nerd” tells The Irish Times though that “the local elections is the election in which technology is probably the least useful”.

“I’m not within my comfort zone knocking on stranger’s doors, saying ‘hello, nice to meet you, I’m great’,” he says, but when dealing with an electoral area “about a kilometre and a half wide and maybe six kilometres long”, the reality is focusing funds and energies on online campaigns doesn’t “get votes”.

Ian Dodson, co-founder of the Digital Marketing Institute, is inclined to agree on the relative ineffectiveness of social media at local or European level here. With voter turnout “in the toilet” and a “massively disconnected electorate”, he says, “if I was a politician in Ireland right now, I wouldn’t be worried at all about social media”.

Candidates who take a “tokenistic approach to digital” will also falter, he adds. “They put absolute rubbish out on Twitter and wonder why they don’t get any traction.”

At local election level, almost every candidate who spoke with The Irish Times emphasised the greater influence of Facebook over Twitter, with Dr Suiter agreeing that with “everybody’s granny now on” the site it represents a better link with the people who will actually vote on May 23rd.

Many of those running this time out also use it as a “crowd sourcing” tool to help get volunteers to assist campaigns.

Of the candidates themselves, Greystones Green Party hopeful Niall Byrne says representatives should “have a presence on all forums to maximise the opportunity to engage with her or his electors”.

Fine Gael’s Sharon Tolan, who is running in Laytown-Bettystown in Meath, comments that “it’s important to realise that ‘likes’ on a [Facebook] page or post does not equate to votes”.

Different view
A candidate in Tallaght South, Martina Genockey, meanwhile, got a rather different view of the power of social media last week when a smartphone video of her being confronted aggressively while campaigning found its way online and was viewed several thousand times.

The incident centred on “abuse” Genockey had received via her Facebook campaign page. The incident, she says, “wouldn’t really change” her feelings on using Facebook as a campaign tool. “You are going to get people who have agendas,” she says. “You need to know how to address it and deal with it.”

As for Twitter, Simon Harris, a Fine Gael candidate for the European Parliament for Ireland South, said when facing an electorate “almost the size of the Netherlands”, utilising your account takes on “additional importance”.

A representative from the campaign of Fianna Fáil MEP candidate for Midlands North West, Senator Thomas Byrne, says the site represents more of a way to connect with a “community of people who already want the candidate to do well”.

The campaign representative adds: “I don’t think anybody, even in the United States, has suggested that somebody decides to switch their vote . . . on the basis of a couple of tweets they’ve read.”

Use of technology
DCU’s Suiter makes the point that it is possibly indicative of the actual use of technology within campaigns here that candidates are “still having debates about the efficacy of using individual tools such as Facebook and Twitter” during an election, when this is a discussion which is “already over in other countries”.

Social media can be effective, though, she admits, with “promoted posts on Facebook” flagged up as a potentially powerful advantage. Suiter notes that this tactic was particularly effective for Helen McEntee, winner of the Meath East byelection last year.

“Due to being able to geographically target users of the social network who could vote for a candidate,” Suiter says that the campaign’s spend of “around €800” looked to have been worthwhile.

“When you look at the reach of the prompted Facebook posts that Helen McEntee had, they were almost identical to her first preference vote.”