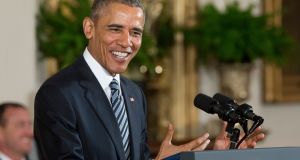 US president Barack Obama: will address the South by Southwest Interactive festival in Austin, Texas which will be attended by several Irish start-ups. Photograph: Michael Reynolds/EPA

US president Barack Obama is to speak at the South by Southwest Interactive (SXSWi) festival in Texas, conference organisers have said.

A number of Irish start-ups are heading over to the festival, along with Enterprise Ireland, IDA Ireland and Dublin Startup Commissioner Niamh Bushnell.

The interactive festival, which showcases cutting-edge technologies and digital creativity, will run from March 11th-15th in Austin. Self-driving cars, virtual reality, artificial intelligence, robots, drones and medtech will be among the topics being explored.

“This year we are stepping it up a notch and working with lots of partners to deliver a strong Irish voice and presence at SXSW,” the IDA said.

On Friday, Dublin Makes Me, a series of events to highlight Dublin as a city of creativity and innovation, will launch at SXSW.

An Irish Start-up Wake, for dead start-ups, their founders, fans and sympathisers, will take place on Sunday.

1 Pilita Clark: When a rude boss keeps you waiting, why not walk out?
2 Comcast acquires Irish cloud-based telco Blueface
3 Five things to watch out for in Apple’s earnings
4 Money matters: ‘My father embarrassed us with his haggling’
5 Henderson Park seek €400m+ for prime Dublin office blocks
Real news has value SUBSCRIBE