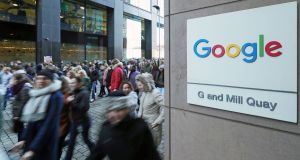 Google employees in Dublin join others from around the world walking out of their offices in protest. Photograph: Niall Carson/PA Wire

Earlier this week, Google employees made a statement - thousands of staff took part in a mass walkout. So what was it all about?

What exactly was Google Walkout?

At 11.10am local time, staff in Google offices around the world walked out as part of Walkout for Real Change in protest about the company’s handling of some sexual harassment claims.

It all came to a head a week after it was reported in the New York Times that Android creator Andy Rubin received a $90 million exit package when he left the company in 2014, but the company had concealed details of a sexual misconduct allegation that triggered his departure. Mr Rubin has denied the allegations.

Starting with offices in Asia, Google employees left their desks and gathered outside to show their support for the protest. Those taking part were urged to leave a flyer at their desk that read: “I’m not at my desk because I’m walking out in solidarity with other Googlers and contractors to protest [ against]sexual harassment, misconduct, lack of transparency, and a workplace culture that’s not working for everyone.”

The protest at Google’s Mountainview headquarters was one of the largest. Employees carried signs reminding Google of its original “don’t be evil” slogan, and chanted “Stand up! Fight back!”.

What were organisers looking for?

There were five demands from the organisers, including an end to mandatory arbitration clauses in cases of discrimination and harassment; a commitment to equal pay; a sexual harassment transparency report that is published publicly; a uniform process for reporting sexual misconduct throughout the company; and a chief diversity officer reporting directly to the board.

Employees were also seeking representation on the board too.

What did Google have to say about the whole thing?

“Yesterday, we let Googlers know that we are aware of the activities planned for Thursday and that employees will have the support they need if they wish to participate,” a statement from the company said. “Employees have raised constructive ideas for how we can improve our policies and our processes going forward. We are taking in all their feedback so we can turn these ideas into action.”

However, it is action that is needed, not words. Google said it had fired 48 people for sexual misconduct in the past two years, without exit packages, but it still had to explain to its staff why some executives were paid off rather than fired on the spot. As one protester put it, “if that behaviour was committed by any one of us who are not executives, we would be quite rightly fired on the spot – not given $90 million to go away”.

Did Google in Dublin take part?

It did. The local coordinator, known only as Kate, spoke to the assembled crowd to thank them for taking part and showing solidarity with people who may have experienced sexual harassment in the workplace.

Employees weren’t too keen to talk to media on the record but a few spoke about how much the protest meant to them personally. Although they hadn’t experienced any of the issues themselves or seen it happen, they still felt it was important to send a message to the company.

Some called for the company to get back to its roots and its original founding principle: don’t be evil. In fact one protester was wearing the Google slogan on a tshirt, despite the cold weather.

Dublin staff were optimistic that the company would listen to its employees. In the end an estimated 20,000 people walked out in 50 cities around the world, and the protest got worldwide attention.

Pichai is said to be meeting his leadership team on Monday to come up with a plan to address the demands.

But the message sent was clear to Google management: time’s up.