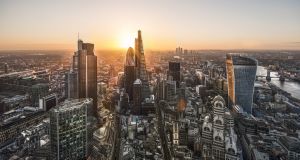 The Growth Stage is the first digital platform to do so, and it is aimed at companies looking for $10 million or more in funding.

A new funding platform aimed at bringing institutions and private growth stage companies together is targeting Irish firms, with access to more than $4 trillion (€3.5 trillion) of assets under management.

Based in London, The Growth Stage helps private companies raise investment capital from regulated institutions, the first digital platform to do so, and it is aimed at companies looking for $10 million or more in funding. Founded by Irish men Simon Stewart and Simon Acton in 2017, the firm is tapping into a new demand from institutional investors to back private companies in their growth stage.

“There is clearly a demand from institutions to get into this space because that is where the growth is,” Mr Stewart said. “Increasingly there has been a real demand by the institutions to invest in private companies. Companies are generally staying longer in private hands than they used to before they list.”

That delay meant a lack of investment targets for institutions, although they were willing to put the money into suitable private companies. The problem was finding them, Mr Stewart said.

The Growth Stage was born out of this gap in the market. The cofounders have extensive experience with investors, and Mr Stewart has also seen the investing climate from the company point of view, having set up his own ecommerce start-up three years ago.

“We are just going for the growth stage where you’ve got tens of million in revenue and you are looking for a Series A of $10 million-plus,” said Mr Stewart. “Our sweet spot would tend to be a Series B, $25 million-plus. These companies are not concepts, they’ve got actual numbers.”

Mr Stewart said the platform was keen to sign up Irish companies seeking investment. “One of our priorities was to target the Irish market because it’s a hotbed of exciting growth companies,” he said. “Not just in tech, associated digital businesses. We want to connect with that community as fast as possible.”

The platform finds suitable companies three ways: through the institutions who have signed up with The Growth Stage; through a panel of 10 top professional advisers that includes Acuris Risk Intelligence, EY, Gallagher, Merrill Corporation, Sage, and WeWork; and through the companies seeking funding contacting the The Growth Stage. It then puts the firms through a vetting process to make sure everything is in order prior to seeking investment.

The firm charges fundraising firms 1 per cent of funds raised only when the deals are struck; there is a quarterly fee for other companies working with The Growth Stage that Mr Stewart said allows the firm to keep the lights on and concentrate on signing up quality companies rather than being forced to concentrate on quantity.

It is a lean enterprise itself, with three people in London, two in the US and plans to hire in Asia in the future.