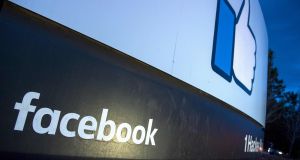 More than $120 billion in market value was wiped off the company’s shares, the most in its history as a public company, marking the largest ever loss of valuation in one day for a US traded company. Photograph: Getty Images

Shares in social media behemoth Facebook opened more than 18 per cent lower after the company issued disappointing results after the closing bell on Wednesday.

More than $120 billion in market value was wiped off the company’s shares, the most in its history as a public company, marking the largest ever loss of valuation in one day for a US traded company.

Shares were trading at $177.845 nine minutes after the stock opened in New York, although shares are marginally up so far this year.

The social-media goliath’s financial performance had previously seemed immune to fierce critiques of its content policies, its failure to safeguard private data, and its changing rules for advertisers.

But on Wednesday Facebook reported sales and user growth numbers for the second quarter that fell short of analysts’ projections, leaving investors reeling.

The company told Wall Street the numbers won’t get any better this year. Chief financial officer David Wehner said revenue growth rates would decline in the third and fourth quarters. Analysts who follow Facebook were blindsided, asking frequently on a conference call with executives for more information on exactly how the company’s financial future had changed so dramatically. “I think many investors are having a hard time reconciling that deceleration,” Brent Thill, an analyst at Jefferies, told Facebook executives, asking for a little more clarity on the reasoning.

“It just seems like the magnitude is beyond anything we’ve seen, especially across a number of the tech (companies) we cover.”

Before the results, Facebook had 44 buy ratings, two sells and two holds. A few analysts tempered their outlook Thursday. For Facebook, financial stumbles are rare. The last time the company missed revenue estimates was the first quarter of 2015. But the results followed a period in which data-privacy issues came under harsh scrutiny, with chief executive Mark Zuckerberg testifying before US Congress for hours on the company’s missteps.

The quarter was also marked by Europe’s implementation of strict new data laws, which Facebook said led to fewer daily visitors in that region. The company was bombarded by public criticism over its content policies, especially in countries such as Myanmar and Sri Lanka where misinformation has led to violence. – Bloomberg