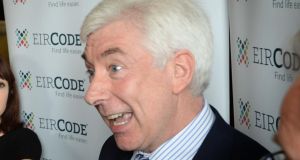 Alex White: would not be drawn on how much the Government expects to spend on the whole process. Photograph: Dara Mac Dónaill/The Irish Times

The dream of high-speed broadband has inched closer to reality for hundreds of thousands of people in rural Ireland.

Minister for Communications Alex White published a draft strategy putting more flesh on plans to connect all areas where the commercial sector is unwilling to invest.

The intervention strategy outlines various aspects of the proposed intervention including the type of network envisaged, the minimum speeds being demanded, the length of the contract for services, and whether the network should be public or privately owned.

There are seven companies likely to enter the bidding process securing what is likely to be a lucrative contract for putting the broadband network in place - Eircom, the ESB, UPC, Imagine, Siro, BT and e-Net.

A number of options are also on the table after the network is in place. The first option would see the Government part-fund the network installation and then cede total control to the wholesale provider.

Alternatively, the Government could run a concession model that would see the provider control the network for the duration of the contract - likely to be 20 years - after which it would return to State ownership.

There could also be a joint venture: a public sector build but private sector operation. The last- and most expensive option would see the State build, own and operate the network itself.

Mr White would not be drawn on how much the Government expects to spend on the whole process. His predecessor, Pat Rabbitte, suggested it could cost in the region of €500 million. That figure could rise of fall depending on the final option chosen by Mr White.

The draft strategy document says the broadband providers who secure Government contracts will have to ensure the service is available at least 99.95 per cent of the time.

Mr White warned that providers who failed to meet these standards would face financial penalties and clawbacks.

The Minister said his department was on schedule to move on to a formal procurement of the State-provided element of the infrastructure before the end of 2015 .

Mr White added he hoped to be in a position to sign contracts with winning bidders by mid-2016. “We can then begin to physically connect our communities - all of our communities - to a modern, future-proofed, high-speed broadband network,” he said.

He told The Irish Times the process would continue irrespective of who is in power after the next general election - which is likely to be in the spring of next year.

The draft strategy, and seven detailed expert reports on specific aspects of the intervention, will now be subject to public consultation, required under EU rules for state aid interventions. The consultation runs until September 14th, 2015.

“In 2010, before this Government came to office, high speed broadband was only available to 300,000 homes in Ireland. That figure has grown to well over a million homes, with the potential for commercial operators to deliver high speed services to as many as 1.9 million premises,” Mr White said.

“Under the intervention strategy I’m publishing today, we expect that 85 per ent of the premises in Ireland will have access to high speed broadband in 2018, increasing to 100 per cent by 2020.”

He said the “scale and challenge of the project” meant it would take time and require “detailed planning to deliver”. He said that what was being built was “an infrastructure for the future. We will only be doing it once, and we intend to get it right”.

The draft strategy, and seven detailed expert reports on specific aspects of the intervention, will now be subject to public consultation, required under EU rules for state aid interventions. The consultation runs until September 14th, 2015.

The Minister said the Government wanted to create an infrastructure that was capable of meeting current and future data demands and deliver a wholesale service open to all retailers, with benchmarked and transparent pricing and conditions for access.

Business activity in Dublin grinds to a seven year low

Business activity in Dublin grinds to a seven year low 06:54
DAA bonuses, Nama’s deadline for Ringsend, and EU solidarity fighting Covid-19 06:33
Coronavirus: Property rental in the jaws of the epidemic 05:55
I want to change my will quickly in case I fall ill. Do I need a lawyer? 05:50
Cold water poured on idea of ‘helicopter money’ 05:46

1 Coronavirus: Property rental in the jaws of the epidemic
2 I want to change my will quickly in case I fall ill. Do I need a lawyer?
3 Staff in Dublin and Cork airports receive profit share and bonuses for last year
4 Major building projects could be delayed two years after Covid crisis
5 DAA bonuses, Nama’s deadline for Ringsend, and EU solidarity fighting Covid-19
Real news has value SUBSCRIBE