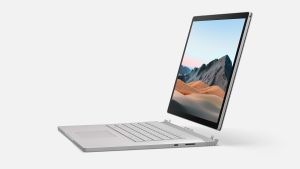 The Surface Book 3 is familiar, well-executed territory. Just go for the higher-spec model.

Microsoft has come a long way when it comes to designing its own hardware. While the early Surface devices were interesting, Microsoft has refined the design and usability, making its range a lot more appealling to people who are bombarded with images of thin and light laptops, and high powered tablets. Put the original Surface next to the latest version and it looks dumpy and dated.

But unlike the original Surface, the Surface Book hasn’t changed all that much in terms of how it looks. Sure, it has a USB C port these days. It’s also been refined in terms of shaving some of the weight off too. But that’s about it. You’d find it hard to distinguish the original from the newest version just by looking at a photo.

There’s still that same thick hinge, nothing too drastic with the keyboard layout, and it comes in any colour you want as long long as it’s silver.

How you feel about that is entirely a personal matter. One person’s dated design is another’s classic. What matters really is what ’s on the inside.

The Surface Book 3, in that respect, has upped its game a bit. The chips are 10th general Intel Core devices, quad core, and the choice hetween i5 and i7 devices. The review device here was the 13.5 inch machine with an i7 chip inside, 32GB of RAM and 512GB of solid state storage; that can be upgraded to 1TB hard drive or 2TB if you feel like the 15 inch device fits your needs better.

There’s a decently sized keyboard, a built in trackpad and a front and rear facing camera, presumably to take account of those who may use it in tablet mode more often; with the keyboard making the overall package weigh over 1.5kg, it’s unlikely you’d be awkwardly holding up the whole laptop to take a photo.

That front facing camera is a 5.0 megapixel device; the rear camera is 8 megapixels with autofocus camera. Both have 1080p HD video, and both take decent photos for a tablet, with better video conferencing performance on the front facing camera than other laptops that have crossed this desk. In Zoom, you can also use the virtual background setting without having to use the green screen feature - great for hiding the background mess without the risk of looking like you’re trying to blend in with the sofa.

For every thing else, the Surface Book 3 worked well. Low intensity tasks were handled with ease, as you would expect. Some Steam games, a bit of video editing - it didn’t stutter or slow down. As a final task, I tried some software that involved rendering 3D graphics. It worked more smoothly than I expected it would, given it was a fairly heavy load.

Still, the Surface Book 3 is an expeisive bit of kit, when you consider that you could probably buy a half-decent laptop (nothing too fancy) and a tablet for the price - or even Microsoft’s only Surface Pro 7 for less. It all depends on what you are looking for. If you bought two separate devices though, you couldn’t hit a button and split the device in two.

The unlocking mechanism works faster, which is a bonus. And once you have that tablet in your hand, it’s a lighter package than carrying around the laptop.

You can also charge the tablet section separately to thekeyboard - the Surface charger fits it - so you don’t need to carry the entire thing around with you.

Combined battery life is 15 hours according to the official stats. That all depends on what you are doing though; the reality is most people will get less. But a full day of work will be eight to nine hours; a transatlantic flight, when we are allowed to take those again, will be 11-ish hours, depending on to what coast you are travelling. The battery life isn’t quite as impressive for the tablet, though you still get enough time out of it for most average tablet-focused tasks.

The good:
If you want a tablet but need a laptop, the Surface Book 3 is a good halfway house. It’s not one or the other, but it tackles both roles well. In tablet mode, it’s light and easy to use; in laptop mode it has the ports you need - unless one of those needs happens to be Thunderbolt, of course.

Some may find the Surface Book 3 is a little underpoiwered for their needs. The chip is a quad core i7, with the option of an i5, but other machines have switched to octacore processors instead.

Having said that, there was little evidence of problems with performance, with the Surface Book 3 handling everything we threw at it - including some redenring.

The rest:
The Surface Pen is a nice add-on, if you can stretch to the extra cash.

The verdict:
The Surface Book 3 is familiar, well-executed territory. Just go for the higher-spec model.

1 My aunt never told us that Gran passed away with no will
2 Ryanair and Aer Lingus cut flights as travel restrictions continue
3 Political row brewing if Ireland loses its appeal on Apple
4 Will Revenue come calling with tax bill if inheritance tax threshold falls?
5 Owners of Cork shopping centre sue for €30m after car causes fire
Real news has value SUBSCRIBE