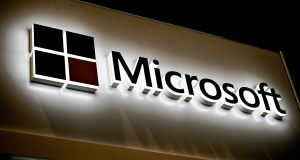 Microsoft’s recent wins include a massive contract with the Pentagon, for which it beat out front-runner Amazon, and a cloud deal with accounting giant KPMG. Photograph: Denis Charlet/AFP via Getty

That compared with the $1.32 (€1.20) per-share average estimate of analysts polled by Bloomberg.

Chief executive officer Satya Nadella has been trying to narrow the gap in cloud infrastructure with market leader amazon.com, in both technical capabilities and the calibre of customer it can attract for its Azure products and services.

Microsoft’s recent wins include a massive contract with the Pentagon, for which it beat out front-runner Amazon, and a cloud deal with accounting giant KPMG.

Microsoft is also pulling in more revenue from Office 365, with companies such as KPMG and Ikea upgrading to the internet-based productivity software.

Azure revenue in the recent period rose 62 per cent and Office 365 sales to businesses increased 27 per cent.

“More importantly, it’s also growing in profitability. As the business scales, the profitability increases. That’s what we are banking on.”