Messagebird to create 50 new jobs with opening of Dublin office

Dutch messaging company has over 15,000 customers including Uber, SAP and Google 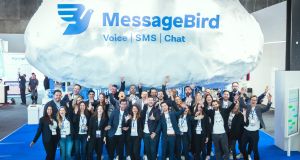 Messagebird, a Dutch messaging company is to create 50 jobs in the Republic of Ireland over the next two years with the opening of a new office in Dublin.

Founded in 2011, the company has developed a cloud communications platform that allows clients to easily communicate with customers via chat, voice, video and messaging.

It said initial hires will be in the areas of sales, customer success and support for its European base.

The new Dublin office is the company’s fourth in Europe and its eighth globally.

“We looked at a couple of other cities but there really was no competition. If you’re looking to set up an office to attract all of Europe then there really is only one option and that is Dublin,” said Robero Marzo, who is to lead the Irish operation.

“The talent is already here so I don’t think we’ll be looking at people relocating to Ireland from elsewhere as all the nationalities and languages we need are already in Dublin,” he added.

Messagebird has more than 15,000 customers with Google, Lufthansa, SAP, Hugo Boss and Uber among them. It employs nearly 250 employees with offices in Amsterdam, London, Hamburg, San Francisco, Shanghai and Sydney.

Bootstrapped and profitable for six years before taking on external funding, Messagebird recorded one of the largest ever early-stage venture capital investment into a European software company when it announced a $60 million fundraise in late 2017.

The series A round was led by the Palo Alto-based Accel Partners, which has backed the likes of Facebook, Slack, Dropbox, Supercell, Spotify, Flipcar and Qualtrics. Other backers included Atomico, the London-based venture capital firm co-founded by Skype founder Niklas Zennström.

Mr Marzo said that unlike close competitors such as Twilio, Messagebird has largely flown under the radar. This he stressed was because as a European software company it had faced many of the growing pains experienced by start-ups operating in multiple jurisdictions earlier than most rivals.

“To reach 400 million customers in the US isn’t as difficult as it is to do in Europe because customers speak the same language and all face the same regulations. To reach that same amount of customers here means crossing many borders so it takes significantly more work,” he said.

“We had to face regulatory compliance challenges very early on and having to build an architecture to address that type of complexity wasn’t easy. It does mean, however, that we overcome difficulties that US companies looking to expand in international markets are only just now grappling with,” Mr Marzo added.

Messagebird, which has already started hiring for the new roles, was last year named as one of Gartner’s fastest-growing tech companies.