Mark Zuckerberg attacked over not attending House of Commons committee 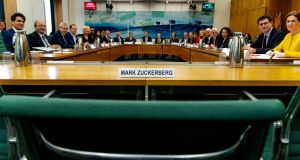 Mark Zuckerberg’s empty chair in the committee room in the House of Commons where he had been invited to answer question from parliamentarians from nine countries.

Facebook founder Mark Zuckerberg was excoriated for refusing to attend a “grand committee” hearing in the House of Commons on Tuesday , where parliamentarians from across the globe criticised its response to all its recent scandals.

The tech giant was repeatedly berated during the three-hour session for its widespread sharing of personal data; for not doing enough to prevent the proliferation of fake news and fake accounts; and for allowing political interference (principally from Russia) and political advertisements undermine democratic institutions.

The meeting was organised by British and Canadian parliamentary committees with responsibilities for social media governance. Members of parliament from Argentina, Brazil, Singapore, Latvia, France, and Belgium also attended as did Hildegarde Naughton chair of the Oireachtas Committee on Communications and her committee colleague, Eamon Ryan of the Green Party.

In a symbolic gesture before the meeting the MPs from nine countries, including Ireland, left an empty chair in the Westminster committee room, along with Mr Zuckerberg’s name plate. In a social media post, it stated: “Nine countries. 24 official representatives. 447 million people represented. One question: where is Mark Zuckerberg?”

Facebook was represented by Richard Allan, its global head of policy solutions and a former Liberal Democrat MP in Britain.

The robust questioning was led by Canadian MP Charlie Angus who accused Mr Zuckerberg of “blowing out the committee” and suggested the company had a over dominant position in the world.

“The problem we have with Facebook is lack of accountability,” Mr Angus said to Mr Allan.

Citing its ownership of Whatsapp and Instagram, he said: “I would put it to you that the best form of regulation would be anti-trust.

. . . To allow it to gobble up every bit of competition is probably not in the public interest. Would you be interest in having a discussion on anti-trust regulation?”

Mr Allan said it depended on the problem.

Mr Angus replied: “The problem is Facebook and its unprecedented control of every form of social discourse and communication.”

Mr Allan told the meeting that Facebook had made mistakes in the past but had taken major actions to address fake news, data sharing manipulation, and the abuse of the platform by extremists.

He said Facebook had taken on “tens of thousands” of new employees to tackle the issues. Asked by Ms Naughton did he accept that global regulation was required, he said: “Some of the solutions [are] on our platform. Some absolutely need regulation.”

However, Facebook was criticised for continuing to “deflect” questions surrounding its practices. Some ‘grand committee’ members referred to numerous questions in past hearings being parried with promises of a written answer that never materialised.

Under persistent questioning from Labour MP, Ian Lucas, Mr Allan was unable to name a single app developer banned from Facebook for inappropriate use of shared data – Mr Allan did not accept Facebook’s policies on data sharing for users was improper, asserting its users had options to control their privacy. However, he added: “There are valid questions about how people understood the controls and if they are too complex,”

Asked by Mr Ryan about the Irish Data Protection Commissioner’s concerns over Facebook allowing access to other users’ data, Mr Allan said the view at the time was the data commissioner was “giving strong advice but not declaring the activity illegal. That allowed us to make a determination whether to contest that or whether we wanted to accept that strong advice.”

“There was a view that platform was working well and people were getting benefit from it. Remember at the time we did not have the scandals with the abuse of platform data.”

In some cases such as the persecution of Rohingya people in Myanmar, Mr Allan accepted Facebook had been too slow to act to provocations on its platform, on that occasion because it did not employ sufficient Burmese speakers to monitor the posts.

“We now have a world leading security team that is finding and catching people and taking them out. [Those people] get on he platform because they are cunning and clever and we have to stay ahead of them.”

“We are in a much better place than we were two years ago,” he added.