Are you master of your domain? If not, the cybersquatters could make business difficult 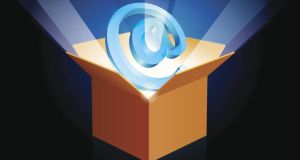 The internet has made millionaires out of some quick-thinking people who bought up generic domain names in the early dotcom years. Domain names can cost less than €1, but if they are highly desirable they can be sold for millions. Take the example of Business. com, which sold to speciality search company RH Donnelly for $350 million in 2007.

The practice dates back to a time when most businesses were not savvy about the commercial opportunities on the internet. However, some of the biggest technology companies today are still slow off the mark when it comes to registering domain names.

One such company is Apple. In 2011, the tech giant paid Sweden-based computing company Xcerion a rumoured $4.5 million for the domain name iCloud. Apple also paid more than $1 million for iPhone.com in 2007.

However, despite being one of the wealthiest tech companies in the world, Apple does not have control of the domain name portfolio for its hit iPad tablets. Apparently iPad.com is a dead website, showing a construction site saying “coming soon”. The website iPadHD.com is owned by an iPad accessories blogger, while iPad2.com is owned by Apple news website Mac Rumors. Apple did, however, secure iPad3.com.

Cybersquatters
Some early dotcom domain grabbers also registered the names of well-known companies as domain names, with the intent of selling the names back to the companies when they finally woke up. While major companies, such as Panasonic and Hertz, were “victims” of these so-called cybersquatters, the majority of companies have taken to evicting cybersquatters through the courts.

One of the very first cybersquatters was American Dennis Toeppen. In the early 1990s he registered more than 200 domain names including Delta Airlines, Neiman Marcus and Eddie Bauer, and then demanded $13,000 for each domain name.

Some people purchased the domain names from him and went on their way, but others including Panavision sued. He lost the case and in 1999, US congress made it illegal to knowingly register websites containing trademarks with the Anticybersquatting Consumer Protection Act.

Generally, a third party registers a domain they “believe” may be valuable, according to Sally Tomkotowicz, customer acquisition manager for the Register365domain registry.

However, she says there are instances where third parties have checked recent companies’ house registrations or trademark registrations and registered matching domains in the relevant geographic region.

“The cheekiest ones are those that haven’t even bought the domain and they send mass emails out to ask if registrants are interested in buying. If they get a response, they then buy the domain to try and privately resell,” she said.

Recent years have seen a rising trend towards cashing in on the goodwill and reputation of a company by buying a similar domain name to that of the company.

While various laws and the World Intellectual Property Organisation (WIPO) have been quick to clamp down on these people, referred to as cybersquatters, the release of new “generic” top-level domains such as .art, .insurance and .sport will make it harder for companies to track cybersquatters who appropriate brand names, siphon traffic their way and run scams, according to barrister and National College of Ireland law lecturer Karen Murray.

Right now, there are a limited number of domains, such as .com, .org and .net. However, the Internet Corporation for Assigned Names and Numbers wants to open it up to new endings like .shop or .music.

She believes the provision of new generic top-level domains, intended to make it easier for consumers to search for something they’re looking for will make it more difficult to track cybersquatters who register names and send traffic their way.

Furthermore, Ms Tomkotowicz says that companies would not be able to afford to create sites for their brands in all domains.

Although it is not permissible to own, sell or use a domain name that contains a trademark, there are ample cases of infringing domain names by cybersquatters which include intentional misspellings or similar names to confuse consumers for financial gain.

Earlier this month, Facebook won damages of nearly $2.8 million in a cybersquatting lawsuit in California.

The social networking site sued 11 individuals and companies arguing they owned domain names similar to those of Facebook.

The domains included either the name Facebook or misspelt versions of it, and many redirected internet users to lookalike sites that generated click-through revenue.

Facebook wins case
The US District Court ruled in favour of the site, recommending that 105 domains be turned over and statutory damages of $2,795,000 be paid. This meant that Facebook became one of the first big companies to win liability damages under the US Anticybersquatting Consumer Protection Act.

This is not the first time Facebook has had to battle for ownership of its name. In 2008, the World Intellectual Property Organisation (WIPO) found in Facebook’s favour in the case of an Irish company that had registered the domain Facebook.ie.

If Irish businesses find themselves the victim of cybersquatters, they can avail of protections under the Trademarks Act 1996 if they are a registered trademark, or can rely upon the tort of passing off, according to Ms Murray. (Passing off involves misrepresenting goods or services to take advantage of another’s goodwill.) “Cybersquatters have received a very unsympathetic response from the courts,” she said.

However, she says these methods can be very expensive, so companies often avail of dispute resolution remedies through the Irish domain registry and WIPO, the dispute-resolution agency of the United Nations.

What remains to be seen is if this figure will continue to rise with the introduction of generic top-level domains.

Either way, with thousands of new top-level domains to play in, it’s a lot of cyberscams to chase.