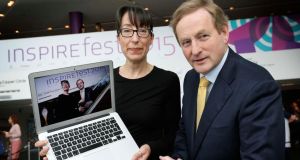 Taoiseach Enda Kenny today described how he is a “big believer” in the potential of gaming to “up our own game” in science and technology education.

Speaking at the second day of Inspirefest, Mr Kenny discussed how “fostering a growing passion for science and encouraging young people, especially young women, to take up careers in the science, technology, engineering and maths (STEM) is essential to future success” he said.

To this end, he described how “compelling, game-based learning will re-invigorate STEM teaching” and increase student motivation to engage in these subjects.

“With game-based learning we combine STEM skill and STEM fun – an unbeatable combination to get children’s attention.”

He also paid tribute to astrophysicist Dame Jocelyn Bell Burnell, who had also spoke at the conference, calling her “a constant champion and promoter of women in science” and described the conference as helping to ensure “we break down barriers for future generations.”

“So in terms of Ireland’s next generation, we’re taking a targeted approach to making sure we have the right skills and the right gender balance in these areas and I’m pleased to see that the numbers of girls taking STEM subjects at second and third level are increasing.”

He further discussed how “it wasn’t just the luck of the Irish” that lead to the country’s current standard, citing figures that Ireland was currently first in world rankings for immunology research, third in neuroscience, and fourth in computer science.

Naming past Irish astronomers such as Agnes Clerke he described how “we weren’t content to leave our genius at astronomy… in the stones and the solstice at Newgrange.”

He also described how modern initiatives such as the BT Young Scientist Exhibition represented a “growing passion for science; not just in our classrooms, but through the exhibitioners, their friends, and their families.”

1 Coronavirus: New government could face €11bn of austerity
2 HSBC board rethinks overhaul and seeks even deeper cuts
3 Working from home: New costs, new stresses and little relief
4 Investor alleges fraud over collapse in property fund value
5 We are ‘sale agreed’, but can we go back with a lower offer?
Real news has value SUBSCRIBE