Jobs boost as CarTrawler gears up for major expansion 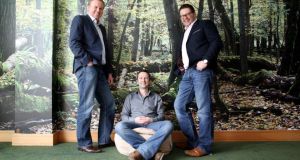 David Paterson with Bobby Healy and Mike McGearty of CarTrawler at the announcement of their deal with BC Partners. Photograph: Jason Clarke Photography

CarTrawler has become yet another Irish firm to notch up a big figure, when investment firm BC Partners bought a majority stake in the firm.

The move sees previous stakeholder ECI sell its share in the Dublin-based company it bought in 2011, along with smaller shareholders that included the company’s founders, Greg and Niall Turley, and its chairman.

The deal is said to have been worth an estimated $450 million (€326 million), although the firm itself would not comment on the exact financial terms.

The deal also saw Insight Venture Partners co-invest in the business, taking a minority stake. The management team, meanwhile, are staying on, and retain a shareholding in the firm.

Despite the change of hands, the management team is keen to stress it’s “business as usual” for the company, which has plans for expansion that could see up its current 200-strong workforce doubled within two years. Most of the new jobs would be located in Dublin.

It’s a long way from CarTrawler’s origins. Coming out of a small broker business in 2004, the company now has partnerships with airlines around the world and has expanded to travel agents and other online travel operators. It has more than 1,200 suppliers, and operates the Holiday Autos and Argus Car Hire brands.


‘Online marketplace’
“What we see ourselves as is a marketplace,” says chief executive Mike McGearty. “We’re an online marketplace for car rental. What we’re looking for is to understand all the different channels a customer might want and we’re able to offer them car rental through those channels.”

After ECI bought into the firm, the growth accelerated.

That initial deal also saw the Turley brothers dispose of the majority of the shareholding in the firm, with speculation at the time they may have netted anywhere between €30 and €40 million each.

The executive team is now made up of eight people, including chief financial officer David Paterson and chief technical officer Bobby Healy. The company works with global airlines such as Air Asia, Virgin Australia and Emirates, and closer to home in recent months has started working with Aer Lingus.

“Those airlines have acted as a beach head in those markets for us, which allowed us then to sign up other partners,” said McGearty. “That’s allowed us to build the business significantly.”

He described the investment as “transformational” for CarTrawler, and one that facilitated the business in a lot of ways. “That’s backed up by the numbers. We’ve grown three-fold.”


‘Addressable market’
The company is seeking to do almost 2.5 million bookings, and is on target to do gross sales of $500 million this year, before moving onwards to better things.

It’s an expansion the company insists would not be possible without the additional reach and expertise brought by BC Partners, which is described as a long-term investor in the business.

“That was significant for us because it gave us a brand that we could now participate in more direct markets,” says McGearty. “That has enabled us to have a very balanced distribution.”

However, despite the company’s growth in recent years, there is still a long way to go. The reality is that CarTrawler has only a small fraction of the global travel market, a situation it wants to rectify.

“This is still very early stage for CarTrawler,” says Paterson. “The global car rental market is worth $45 billion. Our addressable market is worth about $15 billion. If we’ve got $500 million of that, there’s more to do.”

It may seem like a cliche, but CarTrawler’s management insists that the real secret to the company’s success is the people who have joined over the years, rather than the technology.

“Technology is absolutely the catalyst for everything,” Healy says.

However, he gives much of the credit for the company’s success to the team, which is made up of diverse nationalities and skill sets, from technology focused and data scientists to sales experts.


Social scene
“For me the culture here is key,” said Paterson. “There’s a drive to always do better. In a high-growth business, every day is a good day. In a competitive market place, you need to that. The culture at CarTrawler is always about doing better.”

In return though, the company has implemented some of the perks that are becoming more and more common in tech firms – free breakfasts, yoga and pilates classes on site – and it has also fostered a social scene that has sprung up without the usual forced “team-building” exercises by the company itself.

“We have a very balanced team now, and it’s very important for us. We have the people we need to build the business for the next five years.”