IT Alliance Group has 100 jobs to fill

The IT services firm will be attending Career Zoo, the recruitment event that features a coder hack space and ‘smart badges’ 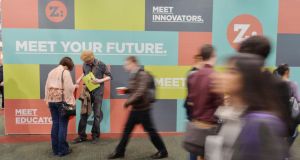 Some of the estimated 10,000 people who attended Career Zoo in the Convention Centre last year. IT Alliance Group has announced 100 job vacancies ahead of its attendance at professional networking and recruitment fair. Photograph: Alan Betson / The Irish Times

IT Alliance Group has announced 100 job vacancies ahead of its attendance at professional networking and recruitment fair Career Zoo on February 21st.

The IT services firm is looking to fill 66 positions in its core IT outsourcing business, 27 roles in its resourcing division and seven roles in its Auxilion subsidiary.

The Dublin firm’s director of people and talent, Dara Mullen, said many companies are now moving ahead on IT projects that had been shelved because of the downturn.

“We have noticed a significant increase in demand as a result of growing business confidence since the summer,” she said. “This is reflected in the fact that in 2015 companies are looking to hire IT teams rather than one or two contractors, as was the case this time last year.

“For the first time since the financial crash of 2008, we are also seeing more buoyancy in rates for specific contractors.”

The IT Alliance Group employs more than 500 people in Ireland. Its clients include Dell, IBM, Microsoft and BT.

Career Zoo, in Dublin’s Convention Centre, is expected to attract 10,000 attendees. Liberty IT, Ericsson, Citrix, Udemy, JP Morgan, SurveyMonkey, Pramerica, Version 1 and Bank of Ireland are among the companies exhibiting.

It is intended to be a “paperless event”. Delegates will be given RFID Smart Badges that allow them to exchange digital versions of their CVs with potential employers.

There will be a Coder Hack Space at the event, where coders can bring their coding problems and speak to one of their peers across Python, Java, Clojure, Ruby, Ruby on Rails, .NET, F# and C++.

“Tech Town will showcase the growing Irish tech sector and the unique employment opportunities that are on offer,” said Career Zoe director Brian Ó hOisín. “From our 2014 events, we found that 55 per cent of attendees were seeking opportunities in the tech sector, which again makes Tech Town a big draw for attendees.”

The event will also have what he calls an “international financial district” that highlights positions across Ireland’s financial sector, both traditional and new tech roles created by the digital revolution.