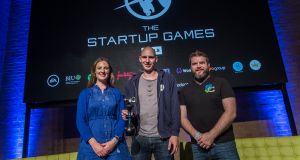 The competition, called The Startup Games, is a pitch contest for early stage start-ups. Three heats took place, with six start-ups in each heat and the top two going forward to the final.

Luuv, a hardware start-up enabling everyone to take professional, shake-free videos, took the top prize in the competition. The company has developed a camera stabiliser for all action cameras, compact cameras and smartphones.

SwiftComply placed second in the competition. The Dublin-based company connects cities, food businesses and compliance service providers in an online platform for the effective recovery and reuse of fat, oil and grease waste.

GirlCrew, a global network for women with almost 45,000 members across 47 cities worldwide, placed third, with cofounder Pamela Newenham, also a business journalist with The Irish Times doing the pitch.

In April, GirlCrew and SwiftComply were named as the Irish winners of the EU Welcome Project Initiative. The prize included free trips to tech conferences in other cities including Startup Europe Summit in Berlin. The DCU Ryan Academy was the sole Irish partner organisation in the Welcome Project.

“The success of GirlCrew and Swift Comply at Startup Europe Summit as two Irish start-ups placing in the top three is evidence of the high standard of Irish start-ups and shows that Ireland can hold our own against our European counterparts. GirlCrew are recent graduates of the Academy’s High Fliers programme.”

Eoghan Stack, chief executive of the DCU Ryan Academy, said the Startup Europe initiative is creating opportunities for start-ups like GirlCrew and Swiftcomply to attend European events like StartUp Europe Summit in Berlin.

“But perhaps what’s most pleasing is when you see GirlCrew and SwiftComply both finish in the top three of the SES start-up pitching competition, you can really appreciate the talent and quality of start-ups that Ireland is generating.” The Startup Europe Summit focused on the future of European entrepreneurship, the challenges and successes of technology and policy in Europe.