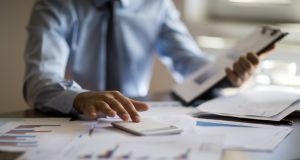 The company said it intended to use the funding to ‘aggressively expand’ the capabilities of its platform. Photograph: Getty

Brightflag, which was founded by Ian Nolan and Alex Kelly in 2015, has developed software that uses text analysis to read and understand legal invoices. This information can then be used to generate savings for big corporations that typically spend many millions on legal fees.

It claims its platform eliminates many of the problems associated with old billing systems such as costly implementation, while also driving savings on external legal spend.

The company said it intended to use the funding to “aggressively expand” the capabilities of its platform.

One Peak is a specialist investor in growth-stage technology and tech-enabled companies in Europe with more than €700 million in assets under management.

The London-based venture capital company, founded by Humbert de Liedekerke and David Klein in 2014, earlier this year launched a new €443 million fund to back European companies.

Sands Capital Group, which previously led a $7million funding round for Brightflag in April 2019, also previously participated in a $25 million investment in life sciences tech start-up Teckro, which has its headquarters in Limerick. Other companies in its portfolio include Docusign, Funding Circle and MuleSoft.