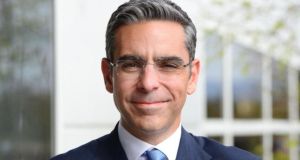 When we think of money, we tend to picture the tangible cash in our wallets rather than the intangible balance in our bank accounts. But it’s more than likely that we will be the last generation to think of money in this way – for today’s children, money will be a predominantly digital means of exchange.

And while there are a number of companies and financial institutions striving to make this vision a reality, one is poised to make that transition happen faster than most of us can imagine – PayPal

PayPal may have started as an online money-transfer service at the dawn of the ecommerce era, but its future is very much in the world of so-called “offline” commerce, also known as the real world.

“It’s an analogue world that’s becoming digital, through mobile phones, through iPads and so on. It’s the perfect alignment of stars to reinvent the shopping experiences.”

This is a pivotal time in the business of commercial transactions, with smartphones and “digital wallets” facilitating a transformation in the way we pay for things. Just as credit and debit cards have superseded cash, so will new smartphone apps and instore sensors supersede our pieces of plastic, goes the thinking, and PayPal is determined to be at the forefront of this transition.

For Marcus, just over a year into the job, the possibilities are huge. “PayPal is already a big and successful company, but I think it could be one of the greatest companies of all time,” he says with absolute sincerity. “I really believe that.”

Marcus was in Ireland this week to attend the official opening of Ebay’s International Operations Centre in Dundalk yesterday, headquarters for European, Middle East and Africa operations for the online auction house and marketplace giant, which has been the parent company of PayPal since acquiring it in 2002.

“We love our presence here – it’s truly unique,” he says. “There’s really nowhere else in Europe where we can get such a talented pool of multilingual candidates that we can hire at this scale, and it’s truly been a great experience for PayPal from the beginning.

“Since we started opening our first operation centres in Dublin we had 40 people, and now the commitment is 3,000. It’s evolved in a big, big way, and that means it’s working really, really well for us.”


Corporate environment
The Dundalk operation will employ 1,450 people, many working in PayPal’s customer services division, an indication of the scale PayPal is now operating at – in the most recent quarter, revenue rose to $1.55 billion, while the total value of transactions processed rose 21 per cent to $41 billion.

It’s also a far cry from the scale Marcus was operating at until recently – the 39-year-old serial entrepreneur is far more used to building his own companies from scratch.

Born in France and long based in Switzerland, he started and sold three companies in Europe before moving to Silicon Valley five years ago to build his fourth company, mobile payments firm Zong.

After a high-profile deal to provide payment services to Facebook, Ebay acquired the firm in 2011, and Marcus found himself in a very different sort of corporate environment, tasked with leading the mobile division as it faced up to growing competition in the space, and leading the development of PayPal Here, the company’s polished in-store mobile payments technology.

Within a year, Marcus was tapped to replace Scott Thompson as PayPal president, after Thompson left for an ill-starred spell as Yahoo chief executive. The challenge for Marcus was in infusing some of the agility of a start-up in a company as established as PayPal.

“I was surprised when [Ebay chief executive] John Donahoe offered me the job, because I was not an obvious choice. I didn’t say yes immediately, I took the night to think about it. I wouldn’t have done it at any other large company, to be frank . . .

“I think we’re uniquely positioned to innovate, really define what shopping experiences are going to be like, define how digital money is experienced by the world. I think it’s fascinating.”

But first, Marcus has had to try to change the culture at the company, which had developed an overly bureaucratic internal structure and was intensely disliked among merchants for the seemingly arbitrary freezing of accounts and the opacity of its security operations, and loathed among developers for the complexity of its APIs.

Last September, Marcus weighed in on an online debate over PayPal’s account-freezing security measures, and frankly acknowledged the problems. “There’s a massive culture change happening at PayPal right now. If we suck at something, we now face it, and we do something about it,” he wrote.

“And when I say love our product, it’s the whole experience, it’s not only the actual product on your mobile phone or on the web, it’s when you call our operations centre like the ones we have in Dundalk.

“And if you’ve got the right culture, the right talents, the right technology, perspective and vision, I think we can build amazing things, and that’s why I’m here.”

Lean and tanned and immaculately groomed, with a sharp grey jacket matching the salt and pepper hair, he could pass for a successful TV actor or former sports star rather than a technology leader. With his ever-so-slightly inflected English, broadly Californian with an occasional hint of his pan-European roots, he conveys a genuine sense of candour.

In trying to instil that sense of groundbreaking potential at PayPal once again, he could be channelling the sky-high ambitions of the original company founders, the so-called PayPal Mafia whose number included Peter Thiel, Max Levchin and Elon Musk, visionaries who continue to shape Silicon Valley.

The addition of some start-up-style governance was badly needed, as younger, more agile firms such as Square, founded by Twitter founder Jack Dorsey, and Stripe, co-founded by the Collison brothers from Limerick, were perceived to be out-innovating PayPal in emerging spaces, particularly in mobile.

“We’re not as agile as a startup,” admits Marcus. “But we have the benefits of scale . . . With a start-up, you have a vision of where you want to take it, and I have a very crisp vision of where I want to take PayPal. The difference is you’re not building it from scratch, and you have to live with what’s there already, but the counterweight to that is 128 million active users, tens of millions of merchants, and compliance in 190 markets, which creates a huge barrier of entry for any other company wanting to do something similar.”

PayPal Here has been making swift progress countering the threat from Square in particular since it debuted last year, rolling out at the Jamba Juice chain in the US, as well as payment options at the Home Depot hardware chain.

PayPal has also just begun to implement a partnership with the Discover credit card network in the US, allowing PayPal users to pay at more than seven million checkouts in brick and mortar retail stores.

“If you want to change behaviour, you need to be wherever people want to shop. If you can only use it once every 15 purchases, you just forget about it, you don’t use it,” says Marcus.

“So the way we did it, and it’s a very US-centric approach, is we cut a deal with Discover, so that they almost lent their rails to us so we can build our own network.”

The move into offline commerce has brought some defensive reactions from MasterCard and Visa, who are imposing fees on PayPal for use of their networks, but Marcus doesn’t seem overly concerned by the potential for conflict, and instead sees the credit card companies as ultimately relying on the innovation his company can provide.


Shopping experience
“The problem is consumers don’t wake up in the morning and say, ‘Today I’m going to pay with a digital wallet’ . . . If you want them to change a habit that’s been engrained for 40-plus years, you need to provide something that’s meaningfully better. The problem is offline you can’t do that with just payments, you need to reinvent the whole shopping experience.”

Imagining what that shopping experience will look like, and how it will be implemented, is the challenge facing Marcus, and one he appears to relish.

“The market will change, experiences will change, probably faster than people think,” he says. He cites how much innovation has occurred since the introduction of the iPhone six years ago.

“Six years from now, the types of experiences that we’re going to see in stores and on mobile are going to radically change. I think we can build phenomenal experiences around shopping, and basically reduce the distance between what you want and just getting that thing you want.”

Talk turns to the changing role of ATMs, and Marcus glances up at PayPal’s communications director. “Oh yes, remind me, I have to stop at one,” he says.

So even the president of PayPal needs to get cash from a machine in the wall? “Not for much longer,” he says with a smile.