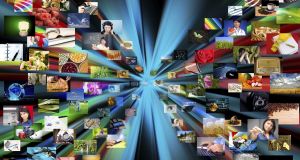 The number of homes in Ireland paying for internet-based television services is expected to more than double by 2021, according to a new forecast that suggests a sharp decline in satellite TV subscriptions across Europe in the coming years. The research indicates that the number of homes in Ireland subscribing to IPTV services, such as Eir’s Vision, will rise to 132,000 households over the next five years, equivalent to about 8 per cent of all homes. This compares to 53,000 homes, or 3.4 per cent of households, at the end of last year.

The Digital TV Research study reveals the number of households in western Europe paying for IPTV services overtook pay satellite TV subscriptions in 2015 and is set to rise further. It forecasts IPTV subscriptions will climb by 27 per cent, or nearly seven million homes, between 2015 and 2021 from 97.4 million to 104.3 million with revenues from such services, increasing by $1.2 billion to $5.77 billion.

Overall, pay TV subscriptions in western Europe are expected to rise to 59.5 per cent over the next five years, from 56.8 per cent.

Simon Murray, the principal analyst at Digital TV Research, said Eir’s entry into a pay TV sector dominated by Sky and Virgin Media (formerly UPC), was paying off. “Traditionally a two-horse race, Eir is disrupting the market,” he told The Irish Times. “The total number of pay TV homes in Ireland will be 1.23 million by 2021 (74.5 per cent of TV households), up from 1.13 million at the end of 2015 (72 per cent of TV households).

“So IPTV will gain subscribers from free-to-air homes such as DTT and satellite. The number of cable TV homes will be flat,” he added. Eir, which launched its Vision service in late 2013, currently has about 45,000 subscribers.

Mr Murray said he did not expect to see full conversion to digital in Ireland until next year at the earliest due to the slow switch-off of analogue cable subscribers. In this, Ireland mirrors many of other EU member states, with just a handful of countries having fully converted to digital so far.

Globally, the number of digital TV homes will rise by 1.08 billion between 2010 and 2021 to 1.67 billion, up 185 per cent. Digital TV penetration will reach 98.3 per cent of television households within five years, with 98 countries having fully converted to digital by 2015 as against just 24 at the end of last year.