Steve Case tells SXSW that food, health and education sectors will be affected 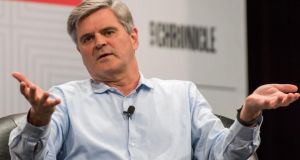 Steve Case, chairman and chief executive officer of Revolution LLC and co-founder of America Online (AOL), told the South By Southwest (SXSW) Interactive Festival in Austin, Texas that the third wave of disruption from the internet is on the way

Speaking at the SXSW Interactive event on Saturday, Case said that the internet is currently on the cusp of its third wave of disruption where a more seamless integration of the internet into daily life will be realised.

“In the first wave, communications were affected, then the second wave impacted media and commerce,” he said. “The third wave will disrupt the rest of the economy, - healthcare, education, transportation, energy, and food.”

The rate of disruption will also be hugely accelerated, says Case. “It took AOL ten years to reach one million users, it took Facebook ten months, Snapchat about ten weeks. It’s only going to get faster.”

Case believes the third wave will see the reemergence of strategic partnerships. “These were critical during the first wave when the world wide web was finding its feet, but not as important in the second as products like Facebook were simply being built upon the internet. But in the third wave, partnerships will matter - those aiming to reinvent education or healthcare, will need to do so by engaging with schools and hospitals.”

Partnerships with government will also become more common. “I know people might be reluctant to the idea of working with government. But as we can already see in realms like net neutrality, their role as regulators will become central. But we musn’t see government simply as regulators. They are also customers. Governments are the biggest spenders in healthcare and education, areas which are sure to be be disrupted in the third wave.”

Opening his SXSW talk by quoting Yogi Bear, Steve Case, who was director of pizza development for Pizza Hut before co founding web veteran AOL, argued that the third internet age will bring growing regionalization and globalization of entrepreneurship. While places like Silicon Valley, Singapore and Ireland may currently be centres of innovation and technology investment, and were at the epicentre of the second wave, the third wave will “wash over entire world, leading to the rise of the rest.”

“Through crowdfunding, capital investment in new startups will emerge from anywhere in the world where entrepreneurship is encouraged,” he says. “Crowd funding platforms will increasingly serve the needs of wealthy accredited investors. The battle between attackers and defenders of the status quo will heat up, and that pace of change will create tremendous opportunities.”