Service will differ from UK, French versions by not sending data to centralised server 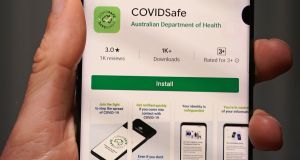 The HSE’s new Covid-19 tracing app will differ from UK or French counterparts in that any data-matching with those infected with the virus will take place on a person’s device rather than information being sent to centralised servers.

This will meet the technical standards for Bluetooth set by Apple and Google for use of its technology being developed to facilitate contact tracking apps, sources have claimed.

The Irish app, which is intended to help the HSE in tracking the spread of coronavirus and facilitating contact tracing for those exposed to the virus, is expected to use Bluetooth to allow phones to facilitate the exchange of information when users confirm a coronavirus infection.

Currently being developed by Waterford-based Nearform, no firm date has been set as to when the app will be available. Nearform has not commented on the development of the software or what functions it will contain, as it is subject to non-disclosure agreements.

A source outside the company said that using a decentralised model means the data will be kept on the phone and all contact matching carried out on the device, with the apps downloading a list of those who have confirmed Covid-19 infections and alerting the user if a match is found. This list would contain anonymised ID data relating the devices of those with infections who have been in contact with someone using the app, but not their personal information.

This approach of carrying out the matching on devices contrasts with the format being taken by the NHS in the UK and France’s health authorities, where data will be sent to a centralised server, and all matches will be carried out there.

A decentralised system is one of the conditions Apple and Google have imposed to allow apps to access the device’s Bluetooth systems while phone screens are locked, pledging to make user privacy a priority. Without that access, apps will not be able to transmit identifiers over Bluetooth while the screen is inactive. Forcing apps to keep the screen active to allow the phone’s Bluetooth to work could have an adverse impact on battery life.

The use of a contact tracing app is an approach already implemented by other counties, including South Korea, Austria, Australia and Israel. The HSE announced at the end of March it would bring out a contact tracing app, and said it expected to have it out around 10 days later. Nearform was later announced as the company responsible for the app development.

The HSE app has yet to be publicly released, although it is understood that it is currently undergoing testing.

There have been conflicting reports about how the HSE’s contact tracing will take place. While it was expected that the app would alert users automatically if they had contact with a confirmed case, reports at the weekend claimed that the contacts would be done by a human team. Other reports claimed the HSE would seek personal information from users such as their location, to help epidemiologists map the outbreak.

That could face opposition from privacy campaigners who warned in recent days against any overreach by the app in the gathering and use of data.

Apple and Google are expected to release the first phase of their joint project in the coming days, while a second phase will see the two companies work together to build the ability for Apple and Android devices to communicate via Bluetooth into the underlying operating system. Both companies have also pledged to disable the technology when it is no longer needed.

1 My aunt never told us that Gran passed away with no will
2 Ryanair and Aer Lingus cut flights as travel restrictions continue
3 Watchdog says retirement age should be 69 by 2040 to protect State finances
4 Johnny Ronan offered Bewley’s the option to buy Grafton Street building
5 Pension age warning, flight cuts and a big day for the Apple tax case
Real news has value SUBSCRIBE