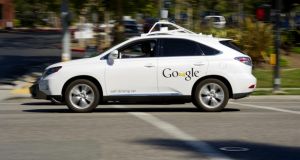 Watch out! A Google car is about. Photograph: David Paul Morris/Bloomberg

Internet search company Google’s self-driving cars have been involved in 11 accidents, but have not been the cause of any, over the last six years since the project began, the programme’s director has said.

A team of drivers that is testing the fleet of more than 20 vehicles have driven 1.7 million miles so far.

“...Not once was the self-driving car the cause of the accident,” Chris Urmson said in a post on technology news website Backchannel’s blog Medium. No one was injured in the accidents, Mr Urmson added.

“If you spend enough time on the road, accidents will happen whether you’re in a car or a self-driving car,” he said.

The Google cars had been hit from behind seven times, mainly at traffic lights, with a majority of the accidents being on city streets rather than on freeways.

“We’ll continue to drive thousands of miles so we can all better understand the all-too common incidents that cause many of us to dislike day-to-day driving and we’ll continue to work hard on developing a self-driving car that can shoulder this burden for us,” Mr Urmson said.