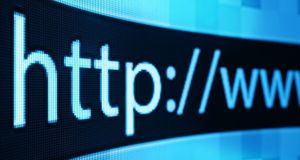 The number of .ie domains registered in the first half of the year is up 11 per cent versus the same period in 2016 and the best performance since 2011.

New figures from the IE Domain Registry (IEDR), the company that manages and maintains the country domain name, show the total number of registered .ie domains as of June 30th, was 230,611.

More than half of the newly registered domains were filed by small and medium sized businesses.

Some 98 per cent of the total were recorded in the Republic, with 1,082 from outside of Ireland and 324 in Northern Ireland.

The growth in registrations locally was largely confined to Dublin, Cork and Galway.

Ireland is currently placed 18th out of 22 European nations for the number of country domain names per 1,000 people, with 49. This is ahead of some countries with larger populations, such as France and Spain, but significantly behind the likes of Denmark.

“Ireland still lacks a complete high-speed broadband network, and continued delays to the National Broadband Plan will not only disadvantage rural citizens, but stifle the growth of rural SMEs, making them less competitive,” said Mr Curtin.

The longest domain name recorded in Ireland in the first half was the catchy irishwordsofwisdomoureldersusedtosayandothertreasuresfoundalong.ie, which at 63 characters is over six times longer than the average .ie domain length of 10 characters.

1 Can husband keep savings and half the house in divorce?
2 British exceptionalism backfires in style as Johnson tests positive for coronavirus
3 Wetherspoon’s panto-villain chairman may have the last laugh
4 Volkswagen burning through €2bn in cash per week
5 Remote working doesn’t suit everyone, and it exposes woolly leadership
Real news has value SUBSCRIBE