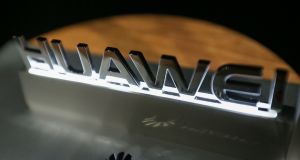 General Electric is to partner with Huawei Technologies to develop smart machines designed to boost productivity, part of a drive to promote its “industrial internet” business in China.

The US industrial giant announced the partnership as it launched an $11 million digital space in Shanghai, where it plans to incubate start-ups and have developers work on new software applications to make machines more intelligent.

The move is part of GE’s ambitious plans to lead a productivity revolution in global industry by combining machinery with analytics, after selling off its financial assets and embarking on a major restructuring.

Chief digital officer Bill Ruh said the world’s biggest maker of jet engines and diesel locomotives had already made $500 million in productivity savings for itself this year by using smarter machines, and he expected this to grow to $1 billion in total by 2020.

“Once we got it right for ourselves we take it to our customers ... We’re bringing this to China, we’re open for business in China today to be able to do this,” he said at a company event in Shanghai.

GE is investing $500 million annually in software as part of the digital drive, and Ruh said the company expected the products to bring in about $6 billion in revenue this year.

GE says it is crucial for industrial firms to digitise their production lines to remain competitive at a time when productivity has fallen from 4 per cent to 1 per cent globally.

The technology promises to connect machines and produce data that can be analysed, for example, to reduce carbon emissions, lower maintenance costs or improve safety.

GE vice chairman John Rice said it was difficult to calculate the potential size of the “industrial internet” market.

“It’s potentially bigger than any estimates I’ve seen, because these capabilities are all going to be developed,” he said.

GE would in turn “leverage” Huawei’s product portfolio and “co-create end-to-end applications for customers”, the companies said in a statement.

1 Bank leaked my loan request to family who tried to rip me off
2 Eason acquires rival Dubray Books for undisclosed sum
3 Siblings who became ill next to wind farm settle case
4 Solar panels: Are they worth the investment?
5 What is at stake for Ireland in the new Brexit talks?
Real news has value SUBSCRIBE