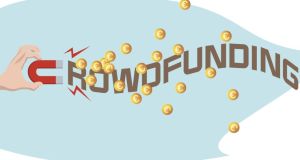 Fundit, an Irish crowdfunding platform for creative ideas, has reached €3 million in pledges to 1,000 projects.

Since its launch in 2011, more than 53,000 people from 60 countries have pledged an average of €53 to projects listed on the site, which has sucessfully funded Irish performances, films, events and projects in music, science, art, fashion, publishing and more.

Fund it is run by Business to Arts, a not-for-profit organisation working to support resilience and transformation in the cultural sector through research, innovation and partnership.

Andrew Hetherington, chief executive of Business to Arts and Fund it, said he regularly sees projects raising over € 20,000 now as creatives become more familiar with the platform.

“We are particularly excited to see project creators being more ambitious and achieving higher targets, often growing confidence in second or subsequent projects,” he said.

Photographer Daragh Muldowney, who used Fund it to raise €12,300 for his first project, “Jewellery Box - Ireland’s Hidden Gems” and over €20,000 for his second, “Out of Thin Air”, says that it gives creative projects that may otherwise have just remained an idea a platform to raise funds.

“Without Fund it there would have been no books,” he says.

The announcement from Fundit comes ahead of US crowdfunding giant Kickstarter’s foray into the Irish market. Tomorrow it will launch a dedicated Irish website for Irish based creators.

1 Economies can be restarted if bold and imaginative choices are made
2 Huawei asks Samsung and SK Hynix for chip supplies in face of US isolation
3 Pricewatch: Coronavirus has given us four categories of shopper
4 Lucy Kellaway: We will miss the office if it dies
5 Denis O’Brien forced to lift hood on Digicel in debt restructuring
Real news has value SUBSCRIBE