Shares dropped 18 per cent, the most since the stock debuted in 1974 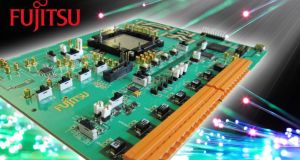 Fujitsu plummeted the most on record in Tokyo trading after forecasting a profit drop.

Fujitsu plummeted the most on record in Tokyo trading after forecasting a profit drop on costs to shift away from the hardware business and as a weaker euro erodes earnings.

Operating income will probably drop 16 percent in the year started April 1 to 150 billion yen (€1.15 billion), the company said Thursday, when it also reported profit that missed analyst estimates and its own forecast.

Fujitsu relied on computer services for 99 per cent of operating income in the year ended March 31, while booking an 89.5 billion yen loss on its audio and navigation equipment business, according to data compiled by Bloomberg.

The company is shifting away from hardware, including mobile phones, to software and services.

Fujitsu plans to book 30 billion yen in one-time charges this fiscal year to “reform its business model,” Masaya Yamasaki, an analyst at Nomura Holdings, wrote in a note to clients.

Nomura cut its rating on the shares to neutral from buy, citing the revamp costs, eroding margins in the hardware business and the effect of a weakening euro on earnings from the region.

Ombudsman upholds 8 tracker complaints against banks 11:01
How well paid do you think you are? Here’s how to work it out 10:40
European markets fall heavily on spreading coronavirus 10:09
Grafton Group sees revenues rise in 2019 on strong Irish, Netherlands growth 09:55
INM acquisition helped Mediahuis increase revenues to €857.9m 09:53

1 Life as a Facebook moderator: ‘People are awful. This is what my job has taught me’
2 Irish in-flight entertainment firm blames coronavirus for closure
3 Ibec warns that Government may have underestimated corporation tax loss
4 Coronavirus: ‘All bets are off’, says aircraft industry chief
5 Tax burden on Irish households among lowest in EU
Real news has value SUBSCRIBE