Consortium rolling out kiosks, which will offer faster speeds than regular services 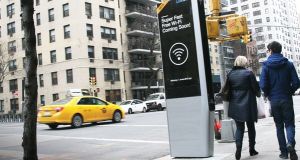 The world’s fastest and largest municipal WiFi network is being rolled out in New York by a consortium of investors including Google, in the latest attempt by the internet company to shake up the US telecoms market.

LinkNYC will provide free-to-use connections with speeds of up to one gigabit per second through a network of 7,500 wireless hotspots that will be located on the sites of old telephone boxes. The speeds on offer will be roughly 20 times faster than the typical broadband service in New York.

The first of two “Link kiosks” will be unveiled on Tuesday on Third Avenue: the nine-foot towers will act as WiFi transmitters for a new superfast fibre network to replace the copper wires that once connected the phone boxes.

Each kiosk will also include a hands-free phone, an Android tablet for web browsing, and two digital screens for displaying advertisements, which will be sold to fund the service.

Customers will be invited to start testing the service later this month, and LinkNYC plans to install a further 500 kiosks by July, at which point the network will be available in all five boroughs of New York.

The consortium of investors behind LinkNYC won the bid to build the service when the city’s phone box franchise was put out to tender to municipal WiFi companies in 2014.

In June last year, the two leading members of the LinkNYC consortium were acquired by Sidewalk Labs, an “urban innovation” company set up by Google, and Dan Doctoroff, the former chief executive of Bloomberg.

The project is part of a broader effort by Google to reshape the US telecoms market, and comes after the company built a superfast fibre network in several cities, including Kansas and Austin. It has also set up its own mobile phone service, Project Fi.

Qualcomm, the chipmaker, is also a member of LinkNYC, while Vonage, the internet telephone provider, will provide free voice calls to US phone numbers via the network.

Stanley Shor, a city official, said the project was part of mayor Bill de Blasio’s efforts to close the “digital divide” in New York, where about one in four families does not have a broadband connection.

“This will replace the city’s old phone boxes with new structures that offer totally free WiFi, bridging the ‘digital divide’,” Mr Shor said at a briefing on Monday. “People who don’t have internet in their homes will be able to have it all throughout the city.”

LinkNYC investors plan to spend roughly $200m building the network, which they hope to finish within eight years. The consortium has promised to pay New York City $500m or half of its total revenues, whichever is greater, by the end of the 12-year contract.

The plan is to generate that revenue by selling advertisements, which will be displayed on 55-inch digital screens, two of which are mounted on either side of every kiosk.

Although LinkNYC will not share the personal details of users with advertisers, it plans to use anonymised data to sell targeted advertisements to marketers

For instance, a group of basketball fans leaving the Barclays Center in Brooklyn might see an advert for a sportswear brand, whereas those leaving a Barbra Streisand concert at the same venue would see a different advert.

“We’re going to use real-time demographic information to inform the adverts, but we will never sell or share personally identifiable data,” said Colin O’Donnell of the LinkNYC consortium.

The project has the potential to steal business from wireless operators such as Verizon, AT&T and T-Mobile US, as customers may decide to use the free network rather than paying their mobile phone carrier for data.

However, Mr Shor said the city had not been lobbied by companies that wanted to block the service, in contrast to other instances where telecoms groups have tried to thwart the creation of municipal internet networks.

The service is intended for customers who want high-speed internet access through their mobile devices while travelling on New York’s streets. However, some people who live close to a kiosk could access the network from inside their apartments, allowing them to dispense with a paid-for internet connection entirely.