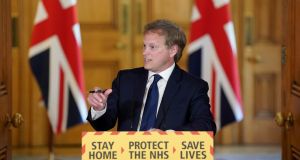 Britain’s secretary of state for transport Grant Shapps: “There is a danger as we go into yet another warm, sunny weekend.”

Britain has agreed a trilateral deal with Ireland and France to keep freight routes open for vital goods such as food and medicines during the coronavirus pandemic. Transport secretary Grant Shapps said the deal signed with Minister for Transport Shane Ross and their French counterpart Jean-Baptiste Djebbari committed the three governments to support freight operators.

“Operators on many of these routes have been under rising financial pressure due to falling demand. Since many of them bring in crucial goods such as medicines, raw materials, and chemicals to purify water, it is important to guarantee the continuation of these services,” he told a press conference in Downing Street.

The agreement says coronavirus threatens to halt the free movement of goods without government action including financial support for operators who could otherwise go out of business.

“Ireland has already announced an intervention in support of some critical routes on the continental and southern corridors from Ireland. The UK has made an announcement of support for critical routes into and out of the UK. France intends to support these efforts during the Covid-19 crisis and thereby contribute to maintaining links with the European continent as a whole,” it says.

“We have initiated a dialogue between our three governments during this crisis to strengthen partnership and share best practices. Residents, workers and businesses should be reassured by our shared commitment.”

The number of people who have died of coronavirus in hospitals in Britain has risen to 19,506, an increase of 768 since Thursday. The British government apologised on Friday after a website for key workers to order test kits stopped accepting applications when it ran out of kits after just two minutes.

Mr Shapps said the website did not crash but that 5,000 kits were ordered immediately after it opened on Friday morning, its entire capacity for the day. The government has promised to increase testing to 100,000 a day by the end of April, a target Mr Shapps said was very high by international standards.

Road traffic in Britain has begun to increase in recent days as some businesses have started reopening but Mr Shapps warned the public against any relaxation of adherence to social distancing guidelines.

“The country has done incredibly well in adhering to social distancing and there is a danger as we go into yet another warm, sunny weekend that people think that perhaps these graphs are showing that the peak is over. It isn’t over, we’re riding perhaps, we hope, a downward trend but it is by no means, no means, established yet. When people ask me when will the measures, the social distancing, the stay-at-home measures, be altered, my answer in some ways is that some of this lies in your own hands,” he said.

“The more we adhere to it and are strict about the social distancing that is required, the faster that decision will be able to be made. But that decision will, of course, be made entirely on the advice of science and medical advice.”