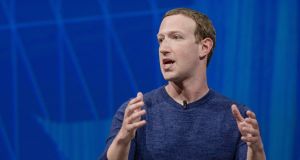 Mark Zuckerberg controls more than 51 per cent of Facebook votes, despite owning only about 14% of the company. Photograph: Bloomberg

Facebook’s Mark Zuckerberg and Sheryl Sandberg faced a significant rebellion from ordinary shareholders, with more than a quarter voting against their re-appointment to the board, as the social network struggles with the fallout from data leaks and disinformation.

More than 60 per cent of the ordinary shareholders also backed proposals to move to a “one vote per share” system, hitting back at the dominance of the founder and insiders whose voting power means they carry every vote.

Class A shareholders have just one vote per share, but class B stock, held by management and directors, is entitled to 10 votes a share. A significant proportion of shareholders with class A ordinary stock withheld their support for the Facebook chief executive and its chief operating officer, if it was assumed that all management and directors voted in favour of each board member, according to a filing released on Tuesday.

The votes took place at a tense annual meeting last Thursday, where one shareholder described Facebook as a “corporate dictatorship”, another was removed from the room for heckling, while a plane trailing a banner from an anti-Facebook campaign group, reading “You Broke Democracy”, flew over the venue.

Including both classes of stock, Mr Zuckerberg and Ms Sandberg were each re-elected with 86 per cent of the vote.

One shareholder proposal for management to initiate a plan to push class B owners to relinquish their “disproportionate rights” received 63 per cent of the vote of ordinary stockholders, despite the Facebook board recommending against it. Another proposal for a “simple majority vote” was backed by 61 per cent of class A votes.

Trillium Asset Management’s proposal to establish a risk oversight committee, in the wake of scandals such as the massive data leak to Cambridge Analytica, received more than a third of class A votes cast. The proposal for Facebook to publish a content governance report, as it grapples with inappropriate content on the platform, received the backing of 30 per cent of class A votes. Some 29 per cent of class A votes were cast in favour of a proposal asking Facebook to publish its median pay by gender, to show the gap in what it pays men and women.

1 Investors pile into property as turnover in build-to-rent sector reaches €2.54bn
2 How can I view my dead brother’s will if I’m not the executor?
3 Provisional liquidator appointed to Dublin engineering firm
4 Bursting of Tesla bubble a case of ‘not if, but when’
5 Mount Charles wins €10m catering contract at Maynooth University
Real news has value SUBSCRIBE