Facebook challenges plan to suspend data transfers to its US parent 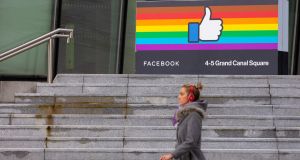 In its challenge, Facebook claims the Data Protection Commissioner failed to conduct an inquiry before it reached its draft decision. Photograph: Patrick Bolger/Bloomberg

Facebook Ireland’s legal challenge aimed at quashing a draft decision by the Data Protection Commission (DPC) that data transfers to its US parent should be suspended, will be heard in December.

The social media giant also wants to halt the commissioner’s probe into those transfers in its action.

A separate challenge by privacy and data rights activist Max Schrems, also aimed at halting the commissioner’s probe will be heard in January.

Mr Schrems’ concern is that the commissioner’s “own volition” investigation will affect the inquiry and outcome of a complaint he made several years ago to the DPC about the handling by Facebook of his personal data. His original complaint was made in 2013 and reformulated in 2015.

When dealing with pre-trial applications in both cases at the Commercial Court on Friday, the division of the High Court which fast-tracks big business litigation, Mr Justice David Barniville confirmed the hearing dates.

The terms include an undertaking on behalf of Mr Schrems not to disclose the precise terms of the Commissioner’s preliminary draft decision.

The DPC investigation was initiated by the commissioner in light of a judgment from the Court of Justice of the European Union last July.

The European court, in proceedings involving the DPC, Facebook and Mr Schrems, ruled that a key arrangement designed to protect EU citizens’ personal data when transferred to the US is invalid.

The DPC informed Facebook Ireland in August that it had arrived at a draft preliminary decision that data transfers outside of the EU should be suspended as they were made in circumstances which fail to guarantee a level of protection to data subjects equivalent to those provided for in EU law.

In its challenge, Facebook claims the DPC failed to conduct an inquiry before it reached its draft decision, had prejudged or prematurely judged the matter, taken irrelevant matters into account and has not afforded Facebook fair procedures.

Facebook claims it was given just three weeks from receipt of the draft finding to make submissions on that.

It wants court orders quashing the draft decision as well as the decision to commence an inquiry under the 2018 Data Protection Act.

The DPC’s probe has been stayed pending the outcome of the proceedings.