Eventbrite to create 50 jobs in Cork 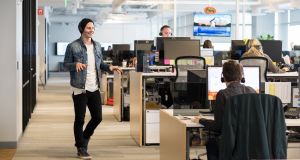 Eventbrite: currently on the lookout for a premises for its expanded office

Self-ticketing platform Eventbrite is establishing a new customer support centre in Cork, intending to create 50 jobs over the next three years.

The company, which is currently on the lookout for a premises for its expanded office, said it would employ 15 full-time customer support staff initially. Recruitment for the positions, which include those with language skills in German, Dutch, Italian, French and English, has already begun.

“It expands the commitment we have to the region and also to extending customer support,”said Joel Crouch, Eventbrite’s general manager for Ireland and the UK.

The company currently processes about two million tickets per week and the Cork office will help it provide support to customers around the world.

This will be the second office the company has opened in Ireland; the first opened in Dublin in 2014, locating in the Digital Hub. Globally, it is Eventbrite’s 10th location.

Cork was just one of a number of cities in the UK and Ireland considered for the customer service centre. It will join the company’s existing support centres in San Francisco, Nashville and Mendoza.

The company is holding one of those centres – Nashville – up as a possible template for the Cork operation. When it was established, the Nashville office had 45 people on its staff; in the past two years, it has doubled in size.

Although there are no firm plans to extend other functions to the Cork site, Mr Crouch did not rule it out in the future as the company continues to expand in Europe.

“Things can change but there are strong signs that this is just a starting point,” he said.

This year marks a decade in business for the ticketing platform. Eventbrite was established in 2006 by Kevin and Julia Hartz, and has since processed more than €4.5 billion in gross ticket sales.

Last year, it processed more than 100 million tickets in 180 countries. The platform has built itself up to be the largest self-service ticketing and registration platform, covering events from large concerts to small yoga classes.

1 Chris Johns: A shopping list for the post-Covid-19 world
2 Cash-starved workers should get access to pension funds, says Mercer
3 Economy could have relatively rapid recovery from Covid-19
4 O’Brien may pull off $1.7bn Digicel debt write-off – but at what cost?
5 Covid-19: Westport braces for tough times ahead
Real news has value SUBSCRIBE