Drop will sell products in Apple stores in US, UK and Canada 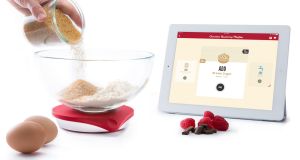 Drop will also sell in Harvey Norman, with a price of €99.95

Drop, a Dublin-based start-up which has created an iPad-connected kitchen scale that guides users through recipes, looks set to become an international Christmas best-seller by securing a retail partnership with Apple.

The company, which has raised $2 million in seed funding, has announced that its products will be available in Apple stores in the US, Canada and the UK from November 18th as well as on Apple.com in a huge break-through for an Irish company founded only in 2012.

Drop has also agreed to sell its products in Harvey Norman stores in Ireland from November 24th and agreed deals with San Francisco-based e-commerce site Brit + Co and Food 52, a crowd-sourced cooking and commerce website. Drop has also launched its own website for direct orders at getdrop.com.

“We’ve always had a big vision for what we wanted to do but PCH allowed us bring our product to market way earlier than we ever could have,” Mr Harris said.

Drop Demo 2 from Get Drop on Vimeo.

“We want everyone to experience the joy of creating something from scratch, without having to go to cooking school or calling a more experienced baking friend. Drop gives you all that, and way more,” he said.

Mr Harris said on the back of every Drop kitchen scale it said “designed in Ireland and made in China” just as Apple describes all its products as designed in California but assembled in China.

Mr Harris said he could not discuss the level of pre-orders of Drop but said it was “thousands upon thousands.”

Mr Harris said Drop’s connected kitchen scale is only the first in a series of smart kitchen products that will fit with its interactive recipe platform.

Drop raised $2 million from investors recently to help it prepare to sell its products globally in a funding round led by Dublin-based Frontline Ventures and American investment fund Innovation Works. PCH is also a shareholder along with the Vegas Tech Fund and WI Harper Group.

Mr Harris found the company along with Jack Phelan, Jonny McCauley and Tim Redfern who are all shareholders. Their product is the first to ship from PCH’s accelerator programme.

“Drop has captured the consumer imagination, with strong pre-sales. It’s phenomenal that less than one year ago they were in Highway1 and today they are getting ready to ship for the holidays,” Mr Casey said.

“The four co-founders are phenomenal entrepreneurs and we’re proud to be part of their team. Their laser-focus on product design, product brand and the consumer experience, is certainly paying off.”

1 Johnny Ronan loses out on €315m Dublin docklands deal
2 Michael Fingleton-linked lands at centre of controversial housing plan in Shankill
3 Bank of Ireland takes €169m charge for 1,700 job cuts
4 City businesses can’t afford to wait for a Covid-19 vaccine
5 How much state pension will I get next year?
Real news has value SUBSCRIBE