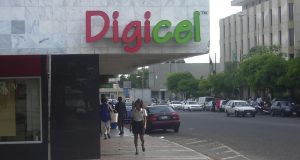 A Digicel shop in Jamaica: the company’s $6.5 billion total debt is denominated in dollars but its revenues come from local currencies in the Caribbean, Central America and the South Pacific. Photograph: Peter Murtagh

Digicel’s near-300-page IPO registration document includes 29 pages of potential risk factors that could affect the business in the years ahead.

Mr Malone now owns 13 per cent of the enlarged business.

Digicel acknowledges that some of its competitors “may have more advanced technology” and a “greater coverage area” than the company.

The document notes that in the year to the end of March 2015 about 60 per cent of Digicel’s revenues came from mobile voice. While its income from data is increasing, “there is uncertainty as to whether the future growth in such services will be sufficient to replace” declines in mobile voice.

Currency fluctuations are another potential problem for Digicel. The company’s $6.5 billion total debt is denominated in dollars but its revenues come from local currencies in the Caribbean, Central America and the South Pacific.

Many of these have weakened against the dollar in recent times, including the euro, which accounts for 7 per cent of Digicel’s revenues, primarily in the French West Indies.

Jamaica and Haiti account for 25 per cent of its revenues and their local currencies have depreciated in value against the dollar by 8.6 per cent and 4.7 per cent respectively.

Mr O’Brien’s majority control of the business, which is set to continue after the IPO, is mentioned among the risks. “His interests may not in all cases align with other shareholders’ interests,” the document states.

Regulation features prominently in the list of risks. Mobile termination rates and network interconnect rates are generally regulated, and these have been reduced in many of its markets. Digicel is also being subjected to more regulation in Jamaica, and has been subjected to additional taxes and levies in many markets over the past decade. The Bermuda-based company might also become subject to taxes on the island after March 31st, 2035.

Digicel notes that some of its operations are exposed to service disruptions from a natural catastrophe. For example, Haiti was the subject of a major earthquake in 2010.

Financing the expansion of the business is noted as a potential difficulty. Digicel’s capital expenditure last year amounted to $648.7 million. And the document outlines the drain on the group by Digicel’s loss-making Panama affiliate, in which Denis O’Brien personally owns a controlling stake. This subsidiary owed the group $306.1 million at the end of March, while the carrying value of the investment was just $6.6 million.

Am I crazy to consider switching to an Ulster Bank mortgage? 06:00
Stocktake: Time for some seasonal stock market strength? 05:50
Stocktake: Global investors want Biden to win 05:40
Stocktake: A Biden victory is not fully priced into markets 05:10
Ghost newspapers and zombie brands are stalking the media 05:03

1 How much state pension will I get next year?
2 Up or down – how much is your Local Property Tax this year?
3 Brexit to curb services trade with UK, accountants group warns
4 Tesco takes to the skies with home delivery by drone
5 Oxford Covid vaccine trials offer hope for elderly
Real news has value SUBSCRIBE