Doug Schmitt, VP and GM for global support and deployment with Dell, says the “skillset” of workers is key to further Irish jobs 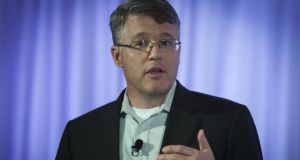 Doug Schmitt: Dell’s metamorphosis “is about transforming to assist the customer”

At the tail end of a trip that’s included a barbecue at Áras an Uachtaráin, a trip to the Cliffs of Moher and inviting a number of “important” clients around for lunch in Dell’s Cherrywood offices, the company’s vice president and general manager for global support and deployment, Doug Schmitt, begins the day as he always does.

Sifting through the latest data collected on the company’s performance from five “global command centres”, one of which is located in Dell’s Limerick offices.

Having examined the findings it’s time to communicate that message “on a broad basis to all the global support and deployment team members”.

In Schmitt’s case, that means reaching out to 40,000-plus “team members” who are directly or indirectly under his wing.

Responsible for heading up “customer support, field deployment, operations and engineering readiness” in over 150 countries, he’s in Ireland for a few days to gather data on a far more “face-to-face” basis from customers and support staff.

“I spent all day yesterday taking the feedback from the customers,” he says, “talking [about] why they’re calling us and seeing how we can make things more efficient.”

Schmitt’s work is at the centre of an interesting period for Dell.

Global support and deployment is said to be worth $4.6 billion to a company that saw PC sales drop by 9 per cent in the first quarter of this year, while enterprise solutions, services and software revenue grew by 12 per cent year-on-year to $5.5 billion in the same period.

All this with an impending $24 billion buyout battle between billionaire Carl Icahn and company CEO Michael Dell set to be voted upon by shareholders later this month. “There are other folks worried about that,” says Schmitt of the competing buyouts.

But the impressive numbers for the services and solutions side are, he says, symptoms of the “transformation of Dell” away from being primarily a consumer-focused PC and laptop manufacturer.

Gaining insight
Visiting the Dublin offices “at least three times a year”, Schmitt’s latest trip to Cherrywood was another chance to “gain insight” from some of the “roughly” 1,200-plus Irish Dell employees who fall under his radar.

That equates to just under 50 per cent of the company’s headcount in Ireland between its Dublin and Limerick bases as well as employees in the Dell-acquired Quest Software offices in Cork.

Will there be an expansion of these numbers anytime soon?

“Yeah,” he says, it’s a possibility, but that’s as far as he’ll go. He says the company will “continue to see [Ireland] as a strong base of operations for global support and deployment”, adding that there has been “slight growth” in employment in this area of late already.

A reticence to guarantee the creation of any new jobs in Ireland is understandable considering Dell’s still relatively recent (January 2009) announcement of 1,900 job losses at its Limerick manufacturing plant, with labour and operational costs among the key contributors to that decision.

Jobs threat
Four and a half years on, with customer support labour costs also lower in other jurisdictions, does Schmitt ever feel relatively well-paid Irish-based support jobs may be under threat as well?

“You do have to weigh up all of that,” he says of the economic aspects of deciding where to base employees. “But one of things I can tell you is the skillset is the number one driver”, something which he believes works in Ireland’s favour, with Dublin, Limerick and Cork-based employees supporting customers across Europe, the Middle East and Africa in over 20 languages.

Continues Schmitt: “Customer satisfaction and the skillset are the first two requirements we have” when deciding where to locate customer support roles, with “being competitive and productive” next in the list of concerns.

“It would not just be saying ‘hey, where’s the labour at?’,” he adds. “It’s how do you make the whole system work better.”

Dell – like other large American companies such as Intel and EMC – is working “very closely” with “some of the local universities” to plug any developing skills gaps in key areas of interest.

Speaking about the support and deployment area in particular, Schmitt says “skillsets that you see us trying to hire” are focused on “analytical management and predictive analytics” as well as “software capabilities and what I’m going to call overall complex environment support”.

Going back to boardroom matters for a moment, he’s at pains to defend the role of consumer goods in Dell’s overall plan.

Despite increased service and solution profits, he doesn’t see any evidence that the company will separate entirely from its more consumer-driven lines.

“To me they’re all linked,” he says, seeing tablet PC development, for instance, as working hand-in-hand with security and bring-your-own-device (BYOD) solutions which the company is now producing in the wake of acquisitions of SonicWall and SecureWorks over the past two years.

That “end-to-end capability” is why, he says, clients choose to “play together with us”.

However, modest sales of the company’s recently launched XPS-10 and Latitude 10 tablets suggest some of those BYOD and security solutions clients may be playing away when it comes to buying a device to compliment them.

Dell’s metamorphosis though, says Schmitt, “is about transforming to assist the customer” whether that’s in terms of devices, cloud, applications, deployment or security.

“Can I foresee every problem [customers] are going to have? I’d be the last guy to tell you that,” he says.

“But tablets, notebooks are still things that our customers want, need and find a great desire to have. So, if you’re saying in the future, if our customers don’t value something anymore will we hang on to it? I can’t predict into the future, but our goals are to invest and grow and have assets and capabilities as well as the people to solve customers’ problems.”