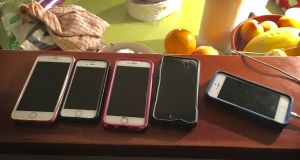 Commissioners sought. The deadline for applications for the two roles, which will have regulatory oversight of an increasingly complex telephone and broadband market here, is August 16th. Photograph: Bryan O’Brien

The Commission for Communications Regulation (ComReg) is expected to fill two of its most senior roles over the next two months ahead of a busy schedule of regulatory work next year.

With chairman Gerry Fahy retiring and fellow commissioner Kevin O’Brien leaving to take up a role at the Central Bank of Ireland, the telecoms regulator will be without two of its three governing commissioners.

The deadline for applications for the roles, which will have regulatory oversight of an increasingly complex telephone and broadband market here, is August 16th.

The recruitment process, which is expected to attract candidates from the private and public sectors here and from abroad, is being conducted by the Public Appointments Service.

The regulator has a number of major projects on the agenda, including a mapping of mobile phone coverage in the Republic; another multiband spectrum auction; and several market reviews, including the wholesale broadband market.

Comreg is seeking extra resources to cope with its workload amid suggestions it needs an additional 70 staff.

Alto, the umbrella group for Irish telcos with the exception of Eir, wrote to Minister for Communications Denis Naughten in June, calling on him to bolster resources at the regulator.

Telecom operators, which pay a government levy of about €130 million a year, are concerned at the lack of resources at the regulator, suggesting that about 70 additional staff are needed to allow it to regulate the market effectively. Comreg declined to comment.

Separately Comreg and Eir have agreed to press pause on their long-running legal battle over Eir’s compliance with existing laws pending discussions on the future regulatory governance of the former semi-State.

Comreg had been seeking to impose a record fine of nearly €10 million on Eir over its alleged failure to comply with obligations to allow other providers access to its network.

1 Farmer seeks to challenge €3.6bn Intel plan in High Court
2 Fallon & Byrne founders McHugh and Byrne exit group
3 Election proposals may make the housing crisis worse
4 Cosgrave should give his speech to Web Summit’s partners in Saudi Arabia
5 RTÉ set to spend €350k on hotels – but celebs will have to buy their own alcohol
Real news has value SUBSCRIBE