Challenge to Intel’s expansion plan to be fast-tracked 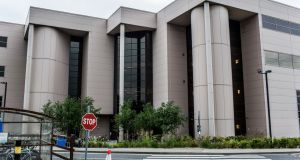 Intel’s headquarters in Leixlip: the case relates to a substantial commercial project which will give employment to 3,000 construction workers.

A farmer’s legal challenge to An Bord Pleanála’s approval for Intel Ireland’s €3.76 billion expansion of its Co Kildare plant is to be fast-tracked in the Commercial Court.

Mr Justice David Barniville on Monday agreed to admit the action by Thomas Reid against the board to the Commercial Court and listed the case for hearing over seven days in December.

The judge said the case involved commercial proceedings in relation to a very substantial commercial project, which will give employment to 3,000 construction workers.

The application to fast track the case was made by Intel Ireland Ltd, a notice party to the judicial review proceedings brought by Mr Reid, who lives just 450m from the Intel campus outside Leixlip.

There was no objection to the application to admit the case to the Commercial Court list.

In 2015, Mr Reid won a landmark Supreme Court decision against IDA Ireland over the use of compulsory purchase orders for his 72-acre Hedsor House farm, which has been in his family for more than a century and is next to Intel’s 160-hectare campus in Collinstown, Leixlip, employing 4,500 people.

The Supreme Court ruled the compulsory purchase could not go ahead. In his judicial review, Mr Reid claims the November 2019 decision of An Bord Pleanála permitting an extended and revised manufacturing facility was made contrary to EU Council directives, lacked sufficient reasons and was contrary to fair procedures and should be quashed.

In an affidavit to the Commercial Court, Intel Ireland manager of construction Niall Dillon said the upgrade of Intel’s Irish facility was essential in ensuring it remained a key location globally in the production of cutting-edge technology.

It was also part of the strategic initiative by Intel to ensure its Irish campus was optimised for next-generation investment within the global corporation when major future capital investments were being considered.

Mr Dillion said Intel’s Leixlip campus had one of the most technologically advanced manufacturing processes in Europe and was to the forefront globally in the production of Intel’s technology.

He said the total cost under the previous 2017 planning permission was some €3.24 billion and Intel had spent in excess of €800 million carrying out further development resulting in the creation of 1,900 construction jobs.

Under the November 2019 planning permission, Mr Dillon said it was estimated it would cost an additional €3.76 billion and 3,000 construction workers would be required over an estimated four-year building programme.

Work had begun but had temporarily ceased at the end of March due to the Covid-19 pandemic. Construction work recommenced on May 18th last and is ongoing, he said.

Intel is anxious to ensure the judicial review proceedings are determined as expeditiously as possible given the commercial aspects. Intel had moved to have the case admitted to the commercial list having regard to the progress of the proceedings to date and the unprecedented impact on the conduct of litigation brought about by Covid-19 restrictions.

1 How to gift your child a house deposit . . . tax free
2 BOI customers to be charged twice with bank fees on New Year’s Eve
3 Family in court dispute over hotels in Dublin and Galway
4 Stripe in talks for new funding at much higher valuation
5 Irish start-up which developed facial recognition for cows raising over $50m
Real news has value SUBSCRIBE