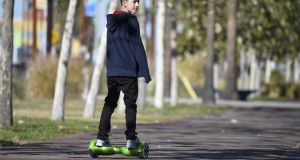 A hoverboard user in California. The  electronic skateboards that have captured the imagination of geeks recently have been dominated by dozens of off-brand companies.

On Thursday afternoon, two US federal marshals showed up at the CES to conduct a raid. As a crowd gathered, the marshals packed up a one-wheeled skateboard on display at a Chinese company’s booth, as well as a sign and fliers promoting the product, and carried them away.

Until that moment, Changzhou First International Trade was having a successful day. It wasn’t the only discount electronic skateboard dealer around, but passersby seemed taken by the design of its product, the Trotter. Instead of a board with a wheel on either end, like the popular hoverboards seen around the show, the Trotter looks like a seesaw with one big wheel in the middle.

One man with a microphone and a camera stopped to take some footage; another quizzed employees about how fast the thing could go. The booth’s staff had trouble answering even basic questions in English, but they did their best. CES has always been full of small-bore dealers, many from China, selling products that look like something you might find in the discount bin at a Best Buy.

The Consumer Technology Association, the trade group that puts on the show, welcomes them, as long as they pay the appropriate fees to rent a booth. Unoriginality is not against the rules. But there is a long-running strain of resentment among companies that feel their patents and trademarks are being violated by low-cost competitors.

CES’s legal department issues guidelines for those who feel wronged, and there’s even a list of rules for face-to-face disputes, including prohibitions on “loud, offensive or embarrassing confrontations” and a limit on the number of people who come along to accuse someone of ripping them off.

The CTA asks companies not to bring more than two employees, one translator, and a lawyer. The raid on the show floor, which involved federal law enforcement, was the result of a weekslong effort by Future Motion, a Silicon Valley startup that said it invented and patented a self-balancing electric skateboard that looks strikingly similar to the ones the marshals confiscated.

The company sent about a half-dozen people from its legal team to accompany the marshals in the raid. The CTA declined to comment, as did a woman present during the raid who appeared to be in charge of the booth, saying the company intended to consult a lawyer.

Lynzey Donahue, a US Marshals official, said marshals served a court order at CES. Future Motion’s Onewheel skateboard is the brainchild of Kyle Doerksen, a designer who had previously worked on electric bicycles.

Several years ago, Doerksen quit his job at the design company Ideo, made a prototype, and rented a booth at CES 2014. The idea was popular enough that a Kickstarter campaign, launched on the same day, eventually raised $630,000. The following year, Doerksen came back with a more finished model. His company, which decided against getting a booth this year, is in town to meet with potential business partners.

Doerksen began the process of patenting aspects of the Onewheel several years ago. In August, Future Motion received a patent for the underlying technology. Earlier this week, it got a second one for the device’s design. This patent prohibits competitors from making something that an ordinary observer might confuse with the Onewheel.

”Would we have done this without the design patent being issued? The answer is we wouldn’t have bothered,” said Shawn Kolitch, a lawyer for the company. ”If you can show the design patent drawing next to an accused product side by side, and they look identical, it helps your case.”

Future Motion first found out about the Changzhou First International Trade product late last year, when a Onewheel user posted about it in an online forum. A listing by the Chinese company on Alibaba’s online marketplace promised to provide some 2,000 boards per month for about $500 apiece to retailers. (Future Motion sells the Onewheel for $1,500 through its website.) “We said, ‘Wow, that’s clearly a knockoff,’” Doerksen said.

According to Alibaba’s website, retailers in Iceland, Germany, and the US bought about $70,000 worth of products. In December, Kolitch sent a letter to Changzhou First International Trade demanding that it stop selling the products. He never heard back.

Kolitch tried again the day before the show floor opened, by approaching the booth directly but got nowhere. By 3:30 p.m. on Wednesday, Onewheel filed a request with a judge to stop the Trotters from being displayed on the show floor. The newfangled electronic skateboards that have captured the imagination of geeks recently have been dominated by dozens of off-brand companies.

A recent segment on NPR’s Planet Money reported how the hoverboard trend has emerged almost spontaneously from dozens of Chinese factories at once. But Shane Chen, a Chinese-American inventor, disputed that idea. He said the so-called hoverboards were his idea. Like Doerksen, Chen is trying to get the government to crack down on his competitors.

After the raid at CES, all the merchandise and signs had been stripped off the booth. The Chinese company’s staff sat around, unclear about what to do next. For Doerksen, getting the booth shut down serves not only to cut off what he saw as an illegitimate competitor but also to protect the reputation of the entire electric skateboard industry.

The explosion in popularity of these products have been threatened by reports of low-quality hoverboards bursting into flames. “If customers start to view the space as full of low-quality, low-cost products, that reflects poorly on everybody,” said Doerksen. “We hate to see someone poison the well.”

1 My aunt never told us that Gran passed away with no will
2 Ryanair and Aer Lingus cut flights as travel restrictions continue
3 Will Revenue come calling with tax bill if inheritance tax threshold falls?
4 Owners of Cork shopping centre sue for €30m after car causes fire
5 Political row brewing if Ireland loses its appeal on Apple
Real news has value SUBSCRIBE