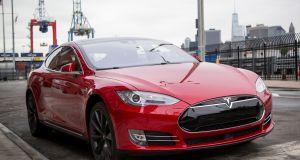 A Tesla Model S: the death of a Florida man, killed while driving a Tesla Model S in its autopilot mode, is a reminder that self-driving car technology is still very much a work in progress. Photograph: Michael Nagle/The New York Times

According to reports from the Florida Highway Patrol, Joshua Brown was using the Autopilot system on his Tesla Model S when the car collided with a truck. Tesla said in a blogpost on Thursday that “neither Autopilot nor the driver noticed the white side of the tractor trailer against a brightly lit sky, so the brake was not applied”. Mr Brown died.

Endeavouring to keep up with the latest innovation, Cantillon has spent time in so-called driverless cars, in one instance criss-crossing the lanes of a German autobahn at speed, the car’s computer system in full control of steering, acceleration and brakes. An unnerving experience, but an insight into the future. Yet at all times the technology was regarded merely as a driver aid. Hands were poised on the wheel to take control, while a right foot hovered over the brake pedal.

A quick perusal of YouTube, however, shows that many motorists are behaving as if the driverless car is a reality right now. That’s far from the case.

Engineers at Mercedes and Volvo recently introduced self-steering, braking and acceleration features to their latest models, but are at pains to point out that these assist systems require driver supervision at all times.

These systems simply aren’t equipped yet to handle the complexity and random nature of everyday road conditions.

Automotive engineers predict we will see driverless cars operating in the relatively controlled motorway environments first, before they are ever rolled out on urban or suburban roads, where they will have to cope with everything from cyclists to errant pedestrians and pets.

On the same day that details of the Tesla crash emerged, BMW yesterday announced it aims to produce fully self-driving cars by 2021 after entering a partnership with US computer chip group Intel and Israeli sensor maker Mobileye. The timeframe seems incredibly ambitious.

Given that 90 per cent of fatalities on our roads are down to driver error, there is huge potential for driverless cars to save lives. Yet what we have now are fancy driver aids, advances in cruise control and lane-keeping systems; a long way from a time when drivers can take a snooze. In summary, keep your eyes on the road and your hands on the wheel.