Dorsey, chief executive of Square, is also in the running for the Twitter top job 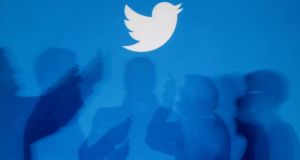 Twitter said this week that it has linked up with payment processor Stripe, founded by the Irish Collison brothers, to let shoppers buy products directly with a tweet. (Photograph:Kacper Pempel/Reuters)

Steve Jobs simultaneously led two companies, Apple and Pixar, as chief executive. Elon Musk is running Tesla and SpaceX. Now more people are saying that Jack Dorsey can permanently run two companies at the same time, too. Dorsey, 38, is chief executive of Square, the mobile payments company that has quietly filed for an initial public offering. He is also the interim leader of Twitter, the social media company he co-founded and is searching for a new chief.

While Dorsey has long been mentioned as a candidate, one hurdle to his getting the job has been the perception that he is too overloaded because he is also managing Square. Some Twitter investors and Square investors are now publicly proclaiming that Dorsey is the right man for the job - both of them.

He will not be distracted by running two tech companies at the same time and can juggle the work, they said. “After watching Jack execute on his vision at Square, and more recently at Twitter as CEO, we are highly confident in Jack’s ability to serve as CEO of both companies,” Justin Dini, a spokesman for Rizvi Traverse Management, said Monday.

Dini said the firm not only had faith in Dorsey but also continued to invest in Twitter because of its belief in Adam Bain, Twitter’s president of global revenue. Rizvi Traverse’s support for Dorsey is significant because the investment company, which is run by Suhail Rizvi, a famously private investor, was Twitter’s single largest outside shareholder at the time of the company’s initial public offering in 2013. The 15.6 per cent stake Rizvi Traverse held in Twitter has shrunk to less than 5 per cent after the firm disbursed Twitter shares to its individual investors, but it remains a big investor in Square.

Rizvi Traverse joins a vocal group calling for Dorsey to permanently run Twitter and Square. Chris Sacca, an early Twitter investor, has repeatedly pushed Twitter’s board to name Dorsey as chief executive. Keith Rabois, a venture capitalist at Khosla Ventures, which is a significant shareholder of Square, said Dorsey could definitely run the two companies simultaneously. “Deion Sanders played in both the World Series and the Super Bowl,” said Rabois, referring to the 1980s and 1990s National Football League and Major League Baseball player. “I don’t see any reason why Jack can’t do that.”

It is not a certainty that Dorsey will get the Twitter job, said two people with knowledge of the discussions, who spoke on the condition of anonymity. Still, other investors are saying they won’t stand in the way of Dorsey taking both jobs. “I think Jack’s the founder of both companies,” Roelof Botha, a Square board member and Sequoia Capital venture capitalist, said in an interview with Bloomberg Television last week. “I don’t think it’s for me to judge, for me to tell him not to do that.” Jim Prosser, a spokesman for Twitter and its board, declined to comment for this article. Aaron Zamost, a Square spokesman, also declined to comment. Botha declined to comment on his remarks. The investor declarations backing Dorsey as chief executive of Twitter and Square increase the pressure on Twitter’s board, which said in June that it would consider only candidates for the job “who are in a position to make a full-time commitment to

Twitter.” The statement would seem to have ruled out Dorsey, who had said that he did not plan to step down as Square’s chief executive.

Twitter board members who remain concerned about Dorsey’s ability to run both companies may well be aware that he is entering an especially busy period. Dorsey is likely to soon begin pitching Square to public market investors at an IPO roadshow, and a public offering is expected before the end of the year, according to two people knowledgeable about the situation. Three months is not an unusual length of time to be seeking a new leader; it took Microsoft about six months to appoint Satya Nadella chief executive last year, after the resignation of Steve Ballmer. Still, some analysts said investors were growing impatient with Twitter’s process, especially as the company continued to grapple with challenges. Many advertisers are waiting to commit additional marketing dollars to Twitter until a permanent leader and strategy are in place, said Robert Peck, an Internet analyst with SunTrust Robinson Humphrey.

Last week, analysts at Citi Research slashed their advertising revenue estimates for Twitter and downgraded the stock to high risk.

Twitter shares closed Friday at $25.29, below the IPO price of $26. All this has helped spur some of the public declarations for Dorsey. “The public shareholders just want to see this move along here,” Peck said. “Investors have come to terms with a CEO of Twitter that is also a CEO of someplace else, whereas that wasn’t the case a few months ago.”

4 No order from DPP to resume inquiry into Anglo auditors