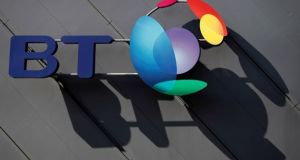 Telecoms company BT has said that it will maintain pay for all employees over the next three months during the Covid-19 crisis, including for those working in Ireland.

A spokeswoman for BT Ireland said that an announcement made by group chief executive Philip Jansen on Monday in which he promised no job losses, also applied to the company’s 600 employees here.

The spokeswoman said the group’s Irish arm is still “actively recruiting for roles in sales, engineering and product development”, even as it prioritises support for critical services, including the emergency call-answering service, which it operates on behalf of the State.

“BT Ireland is currently playing an important role in powering Ireland’s digital infrastructure, as well as keeping our customers connected locally and globally. Despite unprecedented demand for connectivity, our networks are performing strongly,” she said.

Recent media reports indicate that a proposed sale of the Irish unit has been put on hold. The BT spokeswoman said however that the company does not comment on rumours or speculation.

In the same announcement the chief executive said he would also donate his salary to health workers for at least six months and award a pay rise to his frontline staff who are maintaining broadband networks during the coronavirus shutdown.

“This is an unprecedented situation and I want to give our people some certainty about the months ahead,” Mr Jansen said. “This period requires sacrifices from us all, and I want our people to know we are all in this together.”

Mr Jansen, who tested positive for Covid-19 in early March, is paid about £100,000 (€113,830) a month. He will give his salary to a charity helping the British national health service and small businesses in his local community.

In the top job since February 2019, Mr Jansen inherited a major restructuring programme from his predecessor Gavin Patterson that included 13,000 job losses.

BT said its transformation programme would continue but it would retrain and reassign people where possible. Those who normally work in retail are already being redeployed to help customers.

The company said in October that about 6,200 jobs had been removed in 18 months.

A previous commitment to make an award of £500 million worth of shares to all employees will also go ahead. Frontline staff will get an annual pay increase of 1.5 per cent from July 1st while managers will not receive an annual pay rise for 2020/21.