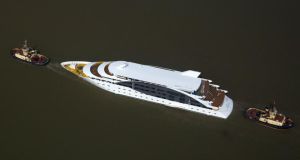 The wifi operator Bitbuzz, which provides internet services mainly to cafes and hotels, has scored itself a rather novel new client.

It has struck a deal with Sunborn, a Finnish company, to install its services on the Sunborn London yacht, a new luxury floating hotel that will open soon near Canary Wharf.

The yacht was moored for years at the Naantali Spa Resort in Finland before it was dickied up and moved to London this month. It will have the usual array of fine-dining eateries and places to get drunk, as well as almost 140 luxury bedrooms for whatever happens after the boozing.

Shane Deasy, one of the founders of Bitbuzz, tells me the company will hire about a dozen more staff by the end of the year as part of an expansion of its activities in Ireland and Britain.

It now has about 500 “hotspots”, including about 150 hotels, and 2.2 million registered users, although not all of those are active.

It will also add a few more free outdoor hotspots in coming months, covering the main thoroughfares of Galway and Tralee. Bitbuzz is already available for free in parts of

The company is also eyeing up a possible expansion into Malaysia, on the back of its partnership with the Tune hotel group, which is headquartered there.

Tune is planning to reopen the Ormond hotel on Dublin’s quays, one of Bernard McNamara’s old projects.

1 How long can Government afford to keep State pension age at 66?
2 Guinness brings out a non-alcoholic version of the black stuff
3 Frank Fitzgibbon stepping down as Sunday Times editor
4 How much will a Covid-19 vaccine cost?
5 Farm lobby seeks EU ban on vegan ‘burger’ and veggie ‘sausage’
Real news has value SUBSCRIBE