Placing aims to raise €5m, which would value the firm at about €20m 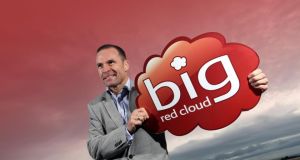 Accounting software company Big Red Cloud is planning to list on the Dublin and London stock exchanges as it seeks to raise to capital for the future growth of the company.

The placing aims to raise €5 million, which is understood would value the firm at about €20 million.

The company, which targets start-ups and small and medium enterprises with both on-premise software and cloud services, will list on the AIM in London and ESM in Dublin.

“Our grassroots is Ireland; I don’t ever want to give that back. I don’t want to give that up,” said chief executive Marc O’Dwyer. The funding raised by the flotation will be used to develop the product further, adding new features, and also to grow into new markets overseas. The company is looking first to Britain and, over time, to Australia, New Zealand, Africa and Europe.

Growth in employees
That will mean growth in employee numbers for the company, which currently employs 20 people and has an office in London. The majority of the jobs growth will be in Ireland, where Big Red Cloud’s support function is based.

Big Red Cloud was established in 1993 as Big Red Book, and was taken over by Mr O’Dwyer in 2001, when he bought a majority share in the firm. The cloud version was launched in September 2012, and has gone from strength to strength. The flotation would reduce Mr O’Dwyer’s stake in the firm, but it is understood he will still retain a majority share.

“There are 44,000 new businesses set up in the UK every month, and that is our sweet spot – small and owner managed businesses who are looking for a simple, easy to use accounting product that they don’t have to have any capex for,” said Mr O’Dwyer.

“As the product stands, it’s suitable to work in any English speaking country with the same accounting rules as the UK and Ireland. We’re looking at the immediate markets that our product will work in.”

He described the company’s success as “phenomenal”, with a 30-day free trial offered by the company to customers converting more than half to paying customers. Growth in user numbers has been in the region of 19 per cent month on month, with more than 1,900 companies and almost 600 accountants using the software.

The firm is optimistic that its potential will be communicated to investors.

Positive feedback
“We’ve had very positive feedback,” Mr O’Dwyer said. “But I’d be lying if I said I wasn’t nervous. I’ve never floated a company. We know accounting software like the back of our hands. I know my business, but I know it as a private business. I’m now going to be facing investors, and that’s more nerve wracking than whether we get the money or not – I know we’ll get the money.”