IFA, a landmark consumer tech event will go on, just in a different way 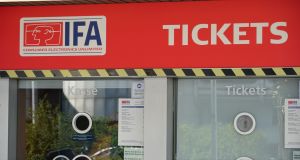 The IFA in Berlin in more normal times. Photograph: iStock

For one of the world’s largest tech shows, specialising in the latest digital inventions, Berlin’s IFA has always been an exhaustingly analogue affair.

A day at the trade fair in the western end of the German capital was always an ordeal of halls, hype, crowds and endless, endless walking.

But Covid-19 has changed everything at a show that normally attracts 1,800 exhibitors, a quarter of a million visitors and orders worth €5 billion.

Rather than admit defeat – following cancelled major shows such as the Google I/O, Mobile World Congress and SXSW – IFA organisers are determined that the show will go on. So much so, they are finally heeding the same digital/innovation message they’ve been flogging us for years. IFA 2020 will be a tech trade fair, organisers say, “but not as we know it”.

If anything, this year’s big launch is not a folding smartphone or a 3D television: but the very idea of how to stage a trade fair in a global pandemic.

“As a long-standing trade fair organiser, we are convinced that our concept of the IFA 2020 Special Edition will enable all partners a successful and safe participation,” says IFA director Dirk Koslowski.

Instead of opening the show to the public in its final days, IFA 2020 will run over just three days and is trade only.

To get around an upper limit of 1,000 people per public event in Berlin, the organisers have divided their event into three: one for keynotes, another for hands-on product presentation and a third for orders.

“And we will recommend people wear protective masks at all times and observe social distancing,” adds Koslowski. Just four halls are in use, instead of 20, with a traffic light system to indicate overcrowding to visitors: in this case more than 750 visitors in a 6,000sq m hall.

For those unable, or unwilling, to attend, all product launch events will be streamed live for press and public online. Sign up free here. The event opens on Thursday with a virtual keynote from Cristiano Amon, president of chip maker Qualcomm, about “latest developments in 5G, AI, and other key technologies”.

Company delegations have been pared back to a minimum, and some 800 journalists have signed up to attend – a fifth of the usual contingent.

For many of them it will be the first opportunity since the last CES in Las Vegas to see the latest products and have face-to-face meetings with lead technology executives at special smaller booths for media only.

Some 800 Asian exhibitors were not issued with visas, a nod to worldwide pandemic travel restrictions, and some of the bigger names are staying away anyway: Apple never attends, while Sony has scheduled its own event for September. Samsung got ahead of IFA with its own product launch on Wednesday in a virtual presentation room, also accessible to IFA visitors.

Huawei and LG are exhibiting, with the latter’s president and chief technology officer, Park Il-Pyung, scheduled to deliver a presentation.

Besides the usual tech products, the South Korean giant is to announce a new face mask with an in-built filter that provides clean air while extracting used air – powered by a battery that lasts a day.

Huawei’s keynote at 1.15pm Irish time on Thursday is expected to present new handsets and smart wearables. Its lower-price subsidiary Honor will be presenting a broad range of products, according to the company, including smartwatches and a “Magicbook” range.

Other smaller tech companies hope to benefit from the absence of the big boys: FitBit boss James Park will be in town to present a new range of fitness tracker products, including devices tailored for people working from home and suffering from a lack of exercise.

With working from home becoming commonplace, IFA organisers say to expect a large range of noise-cancelling headphones and high-end coffee machines to reproduce the office caffeine experience without the office.

With fears of a lockdown winter looming, Germany’s Bosch and Siemens are presenting a new generation of smart household appliances. A new innovation: dishwashers that can be sped up via an app to finish three times more quickly.

IFA organisers admit that their trade fair will be a shadow of itself this year, but the fact it is happening at all is an important signal for the industry.

Filling in the blanks left by a virtual gathering, the new, improved website offers a smart filter function, allowing visitors to search categories, exhibitors, products or contacts – and an integrated chat function to allow direct communication.

“A digital platform can hardly compensate for a true on-site experience,” said IFA executive director Jens Heithecker. “However, the IFA Xtended Space [online offering] enables all those who are interested to know even more and those who cannot join the IFA 2020 Special Edition physically in Berlin to have a truly unique virtual experience.”