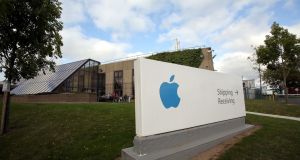 Apple’s campus in Cork. The tech giant says rehiring those previously involved in the grading programme was its ‘first priority’. Photograph: AFP/Getty Images

Apple has begun recruiting several hundred workers for its Siri “grading” team in Ireland only weeks after the company paused the programme, leading to the layoff of contract workers at its Cork facility.

The company has not confirmed figures for the new roles, but it is thought to be more than 400 posts working directly for Apple.

Staff who worked at the Holyhill operation through two contracting companies were let go when the tech giant suspended the quality evaluation process for its digital assistant due to data privacy concerns. Workers employed by Lionbridge were put on paid leave until September 10th while the Globetech contract ended on August 20th.

The grading programme was designed to ensure that Siri was delivering accurate results to users, but a report in the Guardian newspaper in the UK said the company’s contractors regularly heard confidential information and private conversations.

Apple said the sample of Siri requests heard amounted to 0.2 per cent of the total and the data was anonymised. However, the company paused the programme.

The new Siri grading programme will be an opt-in feature for customers, and the company has now begun to rebuild its grading team.

Earlier this week, Apple said the contractors would be able to apply for the roles when the programme restarted, but had not given a timescale for its resumption.

In an email sent out to the contract staff and seen by The Irish Times, rehiring those previously involved in the grading programme was described as Apple’s “first priority”, as the workers already have the skills and experience required for the team.

Among the roles being recruited for are grading analysts, quality analysts and team leaders.