Apple’s new iMac reviewed: could this be the one you’ve been waiting for?

Thin and light, the iMac is an all-round star performer for everyday tasks 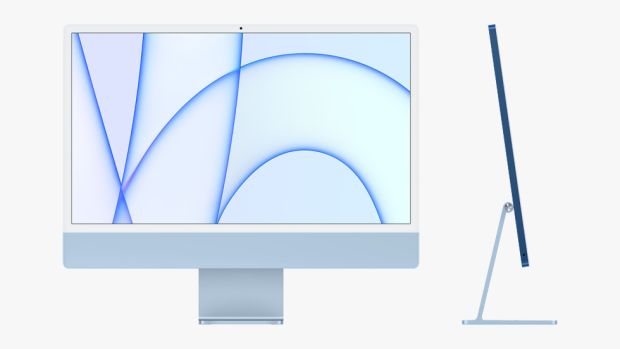 The new iMac really is a thing of beauty. Apple’s 24-inch, M1-powered all-in-one is super-thin at 11.5mm, and comes in a range of colours that relegates the standard silver to the bottom of the pile.

Even my four-year-old, who isn’t known for his appreciation of much in the way of tech unless it’s decorated with cartoon characters, was impressed when I opened the box. A pastel pink iMac, complete with colour-matched mouse, keyboard and cables, might not be everyone’s cup of tea, but it certainly found a few fans here.

If you want to know how far the iMac has come in a few years, turn it sideways. The 24-inch machine is not only thinner than Apple’s most recent all-in-ones, but it is also significantly lighter, something you’ll notice as soon as you lift it out of the box.

I have an older Apple Cinema display that is significantly thicker than the iMac, and that is only a monitor. Apple has crammed the innards of an entire computer into what should be a monitor, and that in itself is something to be impressed by.

If you are in the market for a new iMac, there are three models to consider. The first, the entry level version reviewed here, is available in blue, green, pink and silver; the higher-spec versions add orange, purple and yellow in addition to the extra RAM and ports.

Apple’s three iMac models come with the eight-core M1 processor, Apple’s own chip built for use with MacOS that has been winning over Mac users since it debuted in the MacBook Pro and Mac Mini.

There are plenty of native apps now for the M1 machines, although you can still run apps created for Intel-based Macs thanks to Rosetta 2, so there is nothing to lose out on.

Having used the iMac as my work computer over the past few days, dealing with virtualised desktops, Zoom and Google Hangouts video calls, doing some design work and editing video, did I feel the loss of that eighth GPU core? Not in the slightest.

The iMac’s display is worth spending a bit of time admiring too. The super-bright 24-inch display has a 4.5k resolution, and supports Apple’s TrueTone, which adjusts the colour tone to the ambient light around you, meaning everything looks more natural.

After working on a 13-inch laptop screen for more than a year, having a 24-inch display with all its extra space was a luxury that was appreciated. It was like the digital equivalent of legroom: you don’t know what you’ve been missing until you get it back.

One thing I did feel the loss of was ports. The base model has only two USB 4 Thunderbolt ports for connections. The higher-spec models have two USB 3 ports too, but no USB A, so you’ll need adapters for any peripherals that still have the older connections.

There are some pandemic nods in the iMacs. Apple has improved the camera, with a 1080p high-definition FaceTime camera. You can see the quality of the camera, with good detail even in lower light, which is a definite plus when you take into account the current dependence on video calls and remote meetings. The only drawback is that it might be a little too good, and show up some of those things that a more forgiving camera would disguise, such as piles of stuff you’ve been trying to hide in the background.

The new iMac also has a studio-quality three-mic array, so conversations come in loud and clear, cutting down on background noise. If you are looking for a machine that will take care of your hybrid home working needs, the iMac is it.

The only hiccup I ran into was with sound – and it was all my own doing. Apple has built speakers into the surround of the iMac, and at first everything seemed a little underwhelming, even with the volume cranked up.

That was puzzling, because according to Apple, these are the best speakers it has ever put into an iMac. It’s a six-speaker sound system, with two pairs of force-cancelling woofers and high performance tweeters. The culprit? The packaging. It helps significantly if you realise there’s a strip of plastic that needs to be removed after you unpack the iMac.

Removing that simple strip of plastic unleashed the true potential of those speakers. Whether it is video calls, TV shows or music, the quality was superb.

There are plenty of things to love about the iMac, especially if you are embedded in the Apple ecosystem. Like other Macs, there are technologies to integrate all your Apple devices, from AirDrop and Handoff to the universal clipboard. You can also run your iOS apps on the system.

The iMac 24-inch is shipping on Friday.

The good Where to start? The new iMac will fit in almost anywhere, thanks to its extremely slim frame and new colour options. If you aren’t a fan of pastel shades, this may not suit your aesthetic, but the iMac is beautifully designed and takes up very little space on the desktop.

The new M1 chip gets no complaints here. It’s fast, and thanks to the Rosetta 2 software, there are no conflicts with software created for the Intel machines. Plus you can run iOS apps on your iMac.

The not-so-good More ports would be nice on the cheaper machine. There are only two ports in the entry-level iMac, both thunderbolt and compatible with USB C connections, on the rear of the device, so prepare to buy some adapters and/or new cables, or upgrade to the next version.

It seems a shame that Apple has made the built-in camera so good and yet neglected to include FaceID. If you want to unlock your iMac with biometrics, you’ll need to spend more money, either upgrading to the Magic Keyboard with TouchID which isn’t standard on the base iMac, or by spending the extra €220 and going for the higher-spec model. Considering the extras you get – more ports, the gigabit ethernet connection – the extra cash for the upgraded spec seems like a bargain.

The rest The iMac does include the coveted headphone jack; Apple may have ditched it from the iPhone and iPad, but the iMac soldiers on.

The standard storage is 256GB, although it can be upgraded to 1TB in the base model and 2TB in the other two. Combine your 256GB drive with cloud storage, though, and you are unlikely to miss that physical drive.

The verdict If you’ve been waiting for the right time to jump into the Apple all-in-ones, this may well be it.

2 Can I be a first-time buyer even if my partner bought our current home?

4 Ireland’s property market: What goes up can still come down