Apple has released its latest iPhone in San Francisco. There was no reference to the company’s tax issues or to delays in upgrading other products during the event. Fans hoping for wireless charging for the device were also left disappointed. 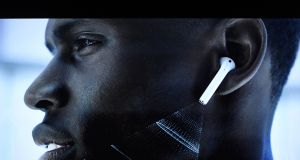 New “breakthrough” wireless earphones called AirPods were unveiled in San Francisco for those wanting to go wireless. The AirPods contain sensors that can tell when they are in a user’s ears, and can be connected to an iPhone or Apple Watch by opening the smart box they come in, that also charges them. Apple said they would have five hours of battery life. Photograph: David Paul Morris/Bloomberg

New iPhones and the second version of the Apple Watch were among the new products announced by Apple at its latest product launch.

The event, held in San Francisco, also featured some input from games company Nintendo as it revealed a new Mario game, Super Mario Run, that will come to iOS later in the year, and an app for Pokemon Go that works on the Apple Watch.

Apple unveiled the iPhone 7 and iPhone 7 Plus, which feature a redesigned case, improved camera technology and ditched the ubiquitous headphone jack in favour of using the “lightning connector”.

The event kicked off with Tim Cook and James Corden in a nod to Carpool Karaoke, before Mr Cook took to the stage to begin the big reveal of what he described as “the most advanced iPhone ever”.

The new waterproof iPhones run on the company’s new A10 Fusion chip – that offers better graphics performance and improved power efficiency – while Apple’s senior VP of marketing Phil Schiller promising it could bring console level performance to the device.

“The new A10 Fusion chip will enable apps that were simply not possible in mobile devices before,” he said. 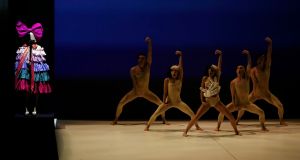 The camera took centre stage at the presentation, with Apple keen to point out the improvements the company had made to both the iPhone 7 and 7 Plus camera.

While the iPhone 7 includes an improved 12-megapixel, rear-facing camera, six-element lens, wider aperture, quad-LED True Tone flash and an Apple designed ISP, along with optical image stabilisation, the iPhone 7 Plus brought in the dual camera as expected, combining a telephoto and a wide-angle lens.

The two cameras operate as one, bringing zoom and depth of field to the phone.

“We’re not saying to throw out your DSLR,” said Mr Schiller. “We are saying that this is the best camera that we’ve made in an iPhone.”

While much of the attention was on the new camera in the phones, Apple also revealed it was pushing users to lightning connector headphones and wireless headphones dubbed AirPods.

Apple will include an adapter in the box that will allow users to connect older earphones to the iPhone 7.

The new device will go on sale in Ireland on Friday, September 16th, with pre-orders starting tomorrow.

As expected, Apple also debuted Apple Watch Series 2, with built in GPS and is waterproof, allowing users to hike or swim with the device.

Apple has also upgraded the chip and GPU powering the watch, and improved the display to a twice as bright as before.