Apple sales for Christmas quarter ahead by 21% 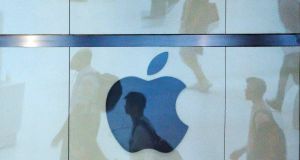 Apple employs about 6,000 people in Ireland, most of them in Cork. Photograph: iStock

Apple shipped its iPhone 12 line-up several weeks later than usual, but an expanded number of models and new look appear to have tapped into pent up demand for upgrades, especially in China. The company also posted strong sales of its Mac laptops and iPads in the quarter, driven by consumers working, learning and playing from home during the pandemic.

Apple employs about 6,000 people in Ireland, most of them in Cork. It has had a presence here since since 1980.

Separately, Facebook beat analysts’ estimates for quarterly revenue on Wednesday, powered by increased ad spending by businesses to capitalise on a Christmas shopping season driven online by the pandemic. Total revenue, which comprises primarily of advertising revenue, rose to $28.07 billion in the fourth quarter ended December 31st from $21.08 billion, a year earlier. Analysts on average estimated quarterly revenue of $26.44 billion, according to IBES data from Refinitiv.

Facebook employs about 5,000 people in the Republic, including staff and contract workers.