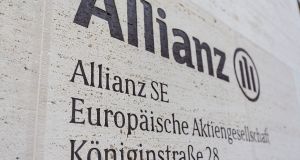 Allianz had also sought orders compelling Google Ireland, Facebook Ireland, and Pinterest Europe Ltd to remove and delete any videos or links referring to Allianz which had been posted by Tessline

Insurer Allianz has obtained High Court injunctions against an Irish-based financial services company that is subject of a warning from the Central Bank of Ireland and a Garda investigation.

Allianz sought the injunctions against Tessline Ltd, with an address at Crescent Building Northwood Crescent, Northwood, Santry, Dublin 9, after the defendant said it was insured by Allianz.

Allianz claimed Tessline had misled customers about its insurance status in posts on social media platforms, including YouTube.

Allianz said it never insured or had an agreement with Tessline, which has held itself out to be an investment and trading firm and an “unquestionable leader in the online investment and asset management markets”.

Tessline had displayed falsified signed documents with what appears to be the Allianz company seal on its website, and on social media posts, to support its claim that a contract of insurance existed between the parties, Allianz also claimed.

It said the alleged co-founder of Tessline, a ‘Mr Iain Cameron’, stated on a video posted on Tessline’s channel last December that the company “signed an insurance contract with one of the largest insurance companies in the world Allianz. We insured Tessline for $1 billion (€890 million ).”

Allianz, which became aware of the claims last October, asked the company to remove the material from social media and, when it failed to do so, initiated High Court proceedings.

The judge, noting there had been “no communication” from Tessline to Allianz, said she was satisfied to make the orders sought based on what was “an ongoing fraud”.

Tessline did not oppose the application and was not represented in court.

The injunctions also restrain Tessline carrying out any advertising, marketing or promotional activity which refers to Allianz, suggesting any connection between the entities or using any of the insurer’s trademarks.

Imogen McGrath, for Allianz, said complaints about Tessline’s conduct have been made to the Garda, the Central Bank, and to the authorities in Germany and Italy.

Counsel said Allianz has also issued a fraud warning about Tessline on Allianz’s own website.

Allianz had also sought orders compelling Google Ireland, Facebook Ireland, and Pinterest Europe Ltd to remove and delete any videos or links referring to Allianz which had been posted by Tessline.

However, counsel said the proceedings against the internet companies could be struck out on consent with no order for costs.

The internet firms had removed the materials of which her client had complained and any further issues would be dealt with on a case by case basis, counsel added.