Referral scheme will offer between €1,000 and €10,000 to individuals who successfully refer people for jobs 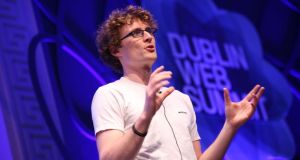 Paddy Cosgrave: “The biggest team we are hiring is in engineering.”

The Summit, formerly the Web Summit, is to create 40 new jobs, bringing total employee numbers to more than 90.

The event, founded by Paddy Cosgrave, David Kelly and Daire Hickey in 2010, has grown from 200 people in a lecture hall in TCD to more than 10,000 attendees at Dublin’s RDS. This year the event is expected to attract more than 20,000 people.

The new roles are in engineering, event management, communications, customer support and sales.

He said people applying for graduate positions would need a 2.1 degree from TCD or a first- class honours degree from other Irish universities. He said the salaries would range from graduate entry level to more than €100,000 for the position of vice-president of sales.

“Finding the calibre of candidate is proving elusive for various reasons and to that end we are announcing a lucrative referral scheme to help find the right people,” Mr Cosgrave said, adding “We’re convinced these people are in Ireland and we want to hire them.”

The scheme will offer between €1,000 and €10,000 to those who successfully refer people to advertised roles at the Summit, with €10,000 offered to people who refer others to positions such as data scientist, iOS engineer, vice-president of sales and head of partnerships.

“They weren’t referred to us by recruiters, they were referred by people. I think the traditional recruitment model is dead,” Mr Cosgrave said.